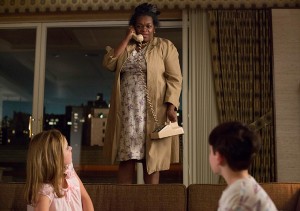 Mad Men is a brilliant show about whiteness. Much in the same way George R.R. Martin considers rape historically accurate in a show about dragons, Matthew Weiner considers the near invisibility of minorities historically accurate in a show about American advertising. I could link to a dozen pieces about it, but why? I come to praise Weiner, not to drag him. (Wait – let me just give him a quick hit – fun fact? The Clio Award that Peggy isn’t getting this season? The one that made Don a major name? Designed mid career by the grandson of a slave. Meet Georg Olden.) Weiner is writing about a very specific group of white people in a very specific class and time. Much like Lena Dunham’s, their New York is 99.9% Ivory White. Their class affords them the privilege of ignoring black America unless events force them to do otherwise. If it’s Grandma Ida breaking into the home, protests in the streets, Betty firing the housekeeper or Pete trying to interview the elevator operator, it takes a riot for their eyes to focus outside themselves. Peggy’s purchase of a building in a minority neighborhood is a sign of how far she’s drifted off her path, how lost and damaged she has become. If Peggy had remained true to herself she’d be safe and happy in the place under Don’s. Never mind that it’s Peggy who commits the only acts of violence we see there. That’s not the point. 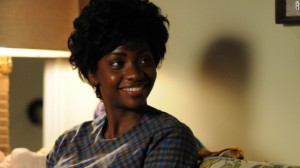 Here’s my point. We need a brilliant show about blackness and we need America to watch it. Mad Men is coming to a close, leaving a huge space for a show equally visionary to fill it’s place. Weiner has created a space for that show to have a built in audience. I don’t mean something like the popular Mad Black Men. I want a show that looks and feels like Mad Men while dealing with the rest of America. I want AMC to run it, Sepinwall to review it, and all of the black actors who’ve ever walked into the frame on Mad Men to star in it. Rewind the tape to the beginning of Mad Men S1 and introduce us to Dawn, Shirley, Grandma Ida, and all the rest. Take us to the barbershops, the church basement, the club (Heck, name it 52nd Street). What happened to Carla’s children? Is Ida a criminal mastermind, a low level hustler or a woman driven to desperation by a violent and grinding life under supremacy? Let the Mad Men actors drift on the edges of their story the way minorities drifted on the edges of theirs. Pivotal scenes from the first series could be an emotional punch in the second. 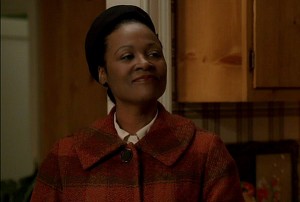 Where is Abe when he’s not with Peggy? How did Lane and his bunny spend their days? Does everyone hate Harry Crane? Even viewers who don’t care about the social milestones Mad Men barely mentions will care about those answers. There is a much bigger story to tell in the Mad Men universe. If Matthew Weiner doesn’t want to tell it, then we need to find his black counterpart who does. Much as All In The Family spawned The Jeffersons, Mad Men is poised to start at the bottom and take us to the top. The stars of Mad Men deserve the careers the show has brought them. These are talented actors delivering more than casual entertainment. (John Slattery is a director I’d love to see helm the new production.) Yet Mad Men is full of stars the evening talk shows barely notice. Deborah Lacey carried a huge emotional weight in her scenes with January Jones. Teyonah Parris lights up the screen when she smiles. 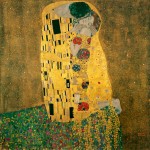 7 Responses to “Why We Need A Black Mad Men”