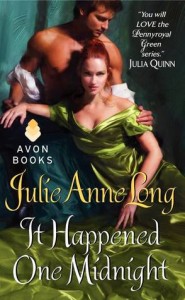 It Happened One Midnight would be far more enjoyable as a single title than as an entry in the Pennyroyal Green series. Eight books in I don’t care at all about the missing Lyon or the weary Olivia. Every mention of either character detracts from the story. That’s a shame because Lyon has an actual purpose this time out.

Jonathan Redmond is Lyon’s less paternally satisfying sibling. After multiple disappointments Father Redmond is cracking down on Jonathan in an attempt to mold a child he can approve of. The shadow of Lyon’s absence keeps him from seeing Jonathan clearly. Cue inevitable father and son clash. Enter Thomasina, (hereafter Tommy) our heroine.

Tommy is a woman with a mysterious background. (This review is long enough without exploring the holes in it.) She may or may not be a courtesan. She’s searching for the security of marriage while keeping her eyes open for other revenue sources. Jonathan brings her into his start up as an investor. Of course Jonathan and Tommy find there is more to each other than they realized. (Duh.) There’s a subplot about child labor but the main focus is on Tommy and Jonathan’s banter.

Overall It Happened One Midnight is a satisfying romance of the light history variety. Characters are varied enough to provide interest and appear to have lives outside of the time spent in Tommy and Jonathan’s orbit. While there are no real surprises neither are there serious offenses. Yet It Happened One Midnight became a rant read for me in it’s closing pages. It’s not about the numerous errors I understand the finished book contained.

HEREAFTER BE SPOILERS, YO!

If you believe that one of the purposes of genre fiction is to uphold or undermine cultural norms what are we to make of the choices here? Tommy is the bastard daughter of a Duke and the courtesan he allegedly loved. The Duke rejected Tommy at birth yet her mother raised her to revere him, going so far as to claim if she were ever in need The Dukester would step up and assist. (I’m not sure who is needier than an infant, but Tommy’s mom isn’t the first woman in history unable to accept he’s really not going to pay child support.) Tommy goes on to have a horrific childhood complete with near death events. Still she believes, because the child inside her has nothing else.

While Long gives Jonathan the opportunity to confront and insult the Duke, she gives no such moment to Tommy. Tommy’s father left her to die. When confronted by Jonathan he confirms his belief that working class children are expendable. Tommy’s father is a completely reprehensible person. I felt no sympathy for Tommy’s father. He knowingly works children to their death. He knowingly abandoned his own child not once but twice. Why should I (or Tommy) care for him?

Long treats Father Redmond differently. Tommy and Jonathan are both given opportunities to condemn his actions. Despite Redmond being a present and loving father in the past, his current pain is tearing apart his relationships. It is bizarre that he is given more condemnation than Tommy’s absent father. Both Tommy and Jonathan threaten Redmond with his greatest fear – losing another child. At this point I expected Long to give Tommy’s father an unlikely change of heart through his friendship with Redmond. It would have been unlikely and predictable but Long laid the groundwork for it.

Instead the book closes with Tommy and the Duke estranged. In the book’s final pages Long has Tommy return a family keepsake to her father with an encouraging note. It is this encouraging note that moved It Happened One Midnight from the A minus to the Low Middle B grade on my reader report card. In having Tommy urge her father to “be brave” Long wants the reader to believe emotional cowardice is the root of his parental rejection. In doing so she places Tommy’s life in a separate category from the other children the Duke would condemn. I don’t think Long is making a class superiority comment so much as one of family solidarity. This incredibly toxic message is showing up in too many historical books this year. Our heroines are returning to abusive families and begging for emotional connections. This is not a happy ending, this is a recipe for disaster.

Final assessment: A decent entry in the series and a solid B. Supports unconditional love for unworthy parents. 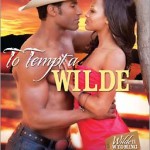 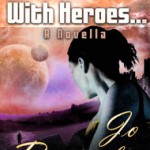 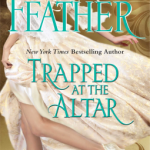 2 Responses to “It Happened One Midnight by Julie Anne Long”