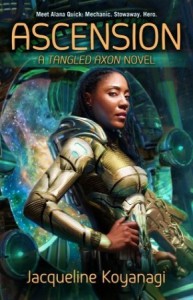 Book Review: Ascension: A Tangled Axon Novel by Jacqueline Koyanagi – This review from the Book Smugglers looks like it might appeal to lots of people following our blog. It’s not a romance, but it sounds like the romance arc in this sci-fi novel is a major part of the book.

“This is what you need to know about Ascension, in a nutshell: a main character who is a queer woman of colour, grappling with a debilitating chronic illness in a context of poverty, who has a difficult relationship with her sister and starts to fall in love with another awesome female character who is polyamorous. IN SPACE.

If the above is not the definition of “shut up and take my money”, I don’t know what is.”

Overcoming the Default: Why More Multicultural Lit Needs Showcasing – Blogger Britta Kirk voices a frustration that many of us share.

“Why can’t there be African American/Caribbean fairies, or Hispanic vampires, or Bi-Racial Hogwarts students? Why can’t we discover what its like to be an Aboriginal Australian girl/guy in a YA adventure, or have an Icelandic heroine, or an old fashioned treasure hunt in Africa with a Nigerian protagonist? A Taiwanese prince?”

Queering Popular Romance (CFP) – I thought I’d signal-boost this, just in case any of our readers have an academic interest in romance.

“Recognizing that there are both similarities and tensions between “queer theory” and “lesbian and gay criticism,” we call not only for papers that consider the importance of identity politics to popular romance fiction—that is, papers on romance novels with LGBTQ protagonists—but also for papers which give “queer” readings of ostensibly heterosexual romances, as well as for those which are theoretically engaged with the fluid concept of “queerness,” no matter the bodies and / or sexualities of the protagonists involved.  We think here of Eve Kosofsky Sedgwick’s famous assertion that “one of the things that ’queer’ can refer to” is “the open mesh of possibilities, gaps, overlaps, dissonances and resonances, lapses and excesses of meaning when the constituent elements of anyone’s gender, of anyone’s sexuality aren’t made (or can’t be made) to signify monolithically.”

Why Do Stores Still Practice Segregation? – While I’m not 100% on her use of the term “segregation,” and I’ve heard good arguments for the practice making it easier to find niche romances, it’s still an interesting discussion.

“Authors who are not white or who write about gay characters are no less romance authors. By segregating their books from other romance, stores send a message that these authors are somehow Other and that they don’t fit in with the romance genre. This hurts readers as well. After all, it’s hard to have that moment of chance discovery with an author like Farrah Rochon or J.L. Langley on the romance shelves when stores won’t even put their books there.” 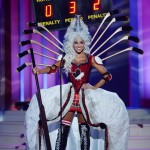