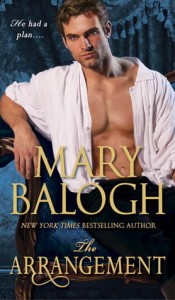 Some books permanently change the reader / author relationship. Having loved Mary Balogh since her earliest days I half-heartedly defended her previous disability themed books but still cringed when she announced The Survivor’s Club series. There are authors that do disability well, and then there’s Mary Balogh. Her disabled characters are more Matt-in-Downton-Abbey than Harold Russell. The Arrangement is the second TSC book. In some ways it’s more successful than The Proposal. (I mean, I finished it without rage reading.) Here Balogh is concerned with a blind hero and a destitute heroine.

Vincent Hunt is a golden god of a man. He’s also blind. He has recently acquired an unexpected title and musical ability. That’s pretty much all you need to know about Vincent. Despite tons of backstory describing him as a take charge problem solving man of action, Vincent undergoes a radical personality change once blinded. His dependency extends past the physical into the emotional. His family coddles him so he runs away to pout about it. Enter Sophia, the poor relation with a comedically unkind family. Sophia is kept at home in her small village by a domineering aunt and social climbing cousin. I couldn’t stand Sophia. She’s one of those women who climbs on the cross and frantically smacks anyone trying to help her off it. She is a martyr of the highest order. She’s also the only one in Vincent’s life (he feels) to see past his blindness and into his soul. He doesn’t care if his peers tell him she’s not pretty (and it would be far more interesting if she wasn’t). He’s drawn to her voice and her innate goodness. Vincent’s right hand man and alleged close childhood friend distrusts her so that seals the deal and they hitch up.

At this point I’m not certain what offended me more in The Arrangement. There is so much to choose from. It was readable and it had some lovely touches so it’s going to do well with people that can set aside the problems of one note characterizations, family dysfunction, class reinforcement and random violence. Balogh asks us to believe that Saint Sophia the Self Effacing is the only person in Vincent’s life that would think to put up a guide rope for his walks. Farmers have used guide ropes for blinding weather conditions since we first made animals sleep outside the house. Either everyone in Vincent’s life is insanely dim or… ok everyone in Vincent’s life is insanely dim. I can’t come up with a second choice. Sophia presents a multitude of ideas to expand Vincent’s limitations, ideas that were in place for a few hundred years prior to her arrival and yet unexamined by anyone else. But let’s step beyond Sophia’s innovations and Vincent’s all encompassing blindness.

Remember Sophia’s living situation? The family that refused to let her leave the home and then cast her out to starve? Them? Vincent encourages Sophia to resume ties with not only that crew, but also the extended relatives that couldn’t be bothered to meet her. Vincent has such a large loving family that he wants Sophia to have a nest of self interested vipers to balance things out. So she does. She takes her toxic extended clan, people who left her to starve, and she embraces them. Saint Sophia the Self Effacing accepts their misdeeds and presents a clean slate to everyone. Well, almost everyone. She can’t quite forgive the one who called her ugly, so Vincent arranges to beat the ever loving crap out of the guy. Nothing says “I love you” like domestic violence. (Um, spoiler alert. Sorry.)

The first half of The Arrangement is stronger than the second. Sophia doesn’t really get her sainthood rolling until after she meets Vincent’s friends. Characterization is stronger before Sophia is demoted from new friend to care coordinator. The relationship between Vincent and his childhood friend / devoted companion disappears once he reenters the forced world of The Survivor’s Club. Whatever personality Vincent held apart from his disability is dominated by their insistence on telling us who he is despite Balogh showing us someone different. A truly bewildering dynamic between Vincent and another member of the nobility is tossed in for no apparent gain beyond pathos. It’s like a same sex relationship that isn’t. You’ll know it when you get there.

Vincent and Sophia began as strong characters finding their way through temporary challenges. They ended as a typically Inspiring Couple made of pity and pathos. Without Sophia’s guiding hand everyone else in Vincent’s life (including Vincent himself) would have failed to make commonsense changes to adapt his home to his life. Without Vincent’s massive cash infusion Sophia would have been forced to sex work or starvation. Luckily, they end up together and a merry band of misfits toasts their eternal union. Even the childhood friend comes around. Oh, and his mother cries. Happy tears, naturally. I just took an aspirin and moved on to the next book.

Final Assessment: If you love inspiring stories about disabled veterans and the wives that don’t leave them, then The Arrangement will hit all your Inspirational Story buttons. 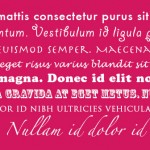 5 Responses to “The Arrangement by Mary Balogh”