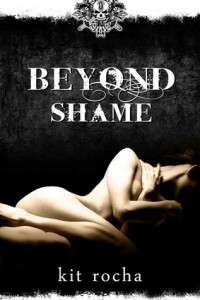 All Noelle Cunningham has ever wanted is a life beyond–beyond the walls of Eden, where only the righteous are allowed to remain, and beyond her stiflingly restrictive existence as a councilman’s daughter. But only ruins lie outside the City, remnants of a society destroyed by solar storms decades earlier.

The sectors surrounding Eden house the corrupt, the criminal–men like Jasper McCray, bootlegger and cage fighter. Jas clawed his way up from nothing to stand at the right hand of Sector Four’s ruthless leader, and he’ll defend the O’Kane gang with his life. But no fight ever prepared him for the exiled City girl who falls at his feet.

Her innocence is undeniable, but so is their intense sexual attraction, and soon they’re crossing every boundary Noelle barely knew she had. But if she wants to belong to Jas, first she’ll have to open herself to the gang, to a dangerous world of sex, lust and violence. A world where passion is power, and freedom is found in submission…

Fifty-eleven people told me to read this book, but I waited until the madness died down before I tiptoed over to amazon to pick it up. I didn’t know what to expect from this one, but I enjoyed it. So far it’s what I wanted the Blackdagger Brotherhood series to be, alpha males with out the ridiculous, pseudo-ebonics. There were a couple sex scenes that dragged on a mite too long, but the sex itself was hot. What I would call BDSM-light. There is some domination and submission stuff and some bondage, but nothing that made me cringe or scream for Noelle’s safety or frame of mind.Sexuality is highlighted as being fluid. Everybody is up for a good time, with everybody. I liked the set up with the ensemble of characters. I liked the way the relationship between Noelle and Jasper developed. And Dallas and Lex added some nice side spice to their situation.

HOWEVER, there was one thing that kept bugging me. This story/series is set in our world, meaning it’s not set on dystopian Mars or something. It seems like it’s set in the US and everyone is white. I mean everyone. Now that could be the way Dallas, the leader of the O’Kane gang, likes things, but I got the impression that any bad-ass man or woman willing to pull their weight and follow the O’Kane rules was welcome. But yeah, everyone was white. Considering white people will soon be a minority in the US (they already are in California and basically the majority of the world) I thought this was interesting and annoying. Do I think it was intentional? Yes and no. I asked the ladies Rocha how many books the series would have and they told me they were writing it out to eight, with the idea of having an Idris Elba look-alike as a hero in book eight.

I’ve already started book two. At least five new characters have popped up outside of the O’Kane gang and they are all white. Does that mean that I have to wait seven more books for any people of color to show up? Maybe. In the meantime though I might just start head-casting Asian people and Latinos all over the place. I’ll come back to this series here on Love In the Margins, as I go along. I’m going to keep reading, because I do like the characters that are present. I’m looking at you, Ace. Please feel free to chat with us about it and any other books that seem to run into this issue. You can start with pretty much any book that takes place in a major city and manages to white wash every block of the landscape.

Final Assessment: Should you read it? If you want to read some hot sexy times, some characters with UMPH! and have even the slightest interest in tattoos, yes. B+ for the enjoyment of reading.

3 Responses to “Beyond Shame by Kit Rocha”