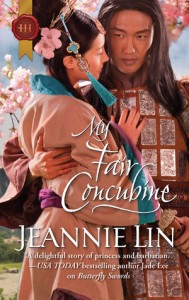 The Nobleman Who Turned a Tea Girl Into a Princess…

Yan Ling tries hard to be servile—it’s what’s expected of a girl of her class. Being intelligent and strong-minded, she finds it a constant battle.

Proud Fei Long is unimpressed by her spirit—until he realizes she’s the answer to his problems. He has to deliver the emperor a “princess.” In two months can he train a tea girl to pass as a noblewoman?

Yet it’s hard to teach good etiquette when all Fei Long wants to do is break it, by taking this tea girl for his own…

I’m going to try my best not to gush and rambling, but I’m warning you guys right now, this review will be filled with gushing and rambling.

So here’s what happened. Boyfriend and I used to stop at a Cheesecake Factory between his job and our place. There’s a Barnes & Noble next door, so often while we were waiting for our to-go order I would go over there to buy a romance novel. (This is why I loved the Goodreads app because I would just pull up my to-read list right there and go searching the shelves. Why’d you have to break my heart, Goodreads? Why?) On this particular night, I was in the mood for some Beverly Jenkins, but they only had Night Hawk and I already had Night Hawk. I was walking along and My Fair Concubine caught my eye because, you guessed it, there aren’t white people on the cover.

I have a delicate relationship with Harlequin romances. I either love them or they leave me regretting every life choice I’ve ever made. I brought this little buddy home and pretty much forgot about her. She was put on my to-read shelf next to forty-five Zoe Archer paperbacks I’ve been saving for an imaginary vacation somewhere cold. Fast-forward over a year and I found myself skimming and I mean skimming though e-book after e-book on my iPad. I think I was a little burnt out on contemporary romances and erotic romance. Then, like it was fate, Jeannie Lin tweeted that My Fair Concubine was on sale on Amazon and I thought HEY, I HAVE THAT BOOK! I SHOULD READ IT NOW! OMG am I glad I did.

I’ll give you the skinny without spoiling, though all I want to do is spoil. Fei Long, a military man and one stud of a hunk, finds himself in a pretty crappy position after his father’s death. His sister who is betrothed to a clan leader in another empire, has run away with her true love, leaving Fei Long to either answer to the head of his kingdom OR find a replacement bride. Enter Yan Ling, a serving girl at a rural tea house.

Fei Long hatches a plan to train Yan Ling to be a proper princess and to pose as his sister to fulfill the marriage pact. They only have a few months to whip her into shape, but Yan Ling is up to the task. Mostly because she’s been put out of her master’s house, but you really should really read to find out why.

I’m sighing just thinking about Yan Ling. She’s my favorite type of heroine; innocent, but tough and curious with a great sense of humor. Her insecurities were realistic. She came from very little, basically worked as a servant and had no formal education, but despite their class distinction, she doesn’t think less of herself. I LOVED that.

Fei Long is one of my favorite types of hero. He’s brooding and a bit cranky, but within reason. He’s trying to keep his household together. Even if you don’t understand Chinese traditions, you can understand the pressure of thinking you might be the one to let your whole family go shit after your parent passes away. It’s a lot of pressure.

As they continue with Mission Princess Bride, they slowly start falling for each other. The tension is so thick and juicy and perfect. I actually cried twice the tension was so good. I mean they fall in LUB, but the mission!!! I stayed up way past my bedtime because I was so anxious to see how Lin was going to get these two out of this pickle of a jam. The scenes, yes sceneS when they are finally together are so well written. I mean if someone said to me what Fei Long said to Yan Ling we’d get married right there on the spot. The sexy times and even the smoochie times were both sweet and sexy, but honestly the story was so good I think they could have simply kissed and I would have been more than okay with that.

The supporting characters, the house servant, Dao, and Fei Long’s BFF, Li Bai Shen, don’t just serves as human props, but they actually add valuable meat to the story. You care about them too. Plus they were both pretty funny. The villains of the story are equal parts annoying and homicidal. They added the perfect amount of pressure to the mission. Of course there’s a happy ending that left me wanting to read more about these characters. Jeannie Lin will join Beverly Jenkins on my Heck Yes shelf. I can’t wait to read her other books.

Final Assessment: Should you read it? Yes. Hell yes. Read it twice. A

Series: This is book #3 in the Tang Dynasty Series. The worlds connect, but I’m not sure about character overlap.

The Book of Negroes E3 and E4
Comments are closed.
Love in the Margins is a group romance blog trying to hit on the love stories that represent us all. We welcome discussion and criticism as we read through the stories of those whose lives don’t fit into the neat and tidy box labeled “default.”