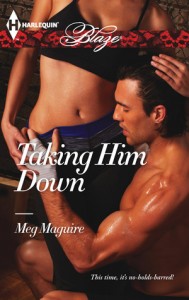 Matchmaker Lindsey Tuttle is going through a rough patch in life. After moving to Boston from western Mass with her newly-minted lawyer fiance, she’s neither engaged nor sure if her relationship’s worth the effort any more. When the cocky, gorgeous, MMA fighter Rich Estrada kicks their ongoing flirtation up a notch, Lindsey doesn’t bother trying to fight the attraction between them. Just as things are heating up in the back of a cab, a text message stops Rich cold, leaving Lindsey wondering what went wrong.

Nearly a year after that night in the cab, Rich still thinks about Lindsey. He may be thousands of miles away in San Diego, training for his first big championship fight, but he can’t help but wonder: What would’ve happened if her friend hadn’t texted him to say she had a live-in boyfriend? When a broken foot sends him back to Boston to recover, he gets another chance to see what, if anything, is going on with him and the sexy little matchmaker.

There was an awful lot that I liked about this book. I really dug the sexual tension between Lindsey and Rich, and how how they were sorta friends but never platonic. There’s this great playful, intimate vibe to Rich and Lindsey’s interactions that’s both hot as hell and totally adorable. Their first kiss in the back of the cab is a great example of this.

She was staring. They were both staring, though the pointedness of it didn’t seem to unnerve Rich a jot. Then again, he routinely peered into the eyes of men hell-bent on knocking him unconscious.

“What?” she asked, unable to bear the suspense.

Her heart pounded. “Oh. I didn’t think we were. I was just staring because you were staring.”

“I was waiting for some little female signal. But your poker face is stone-cold.”

Another thing I really liked was that she was in a relationship at the start of the book and its dissolution takes place on page without demonizing the ex. Lindsey comes with a past that made her who she is today without victimizing her, and that’s sort of a rarity in romance. I enjoyed the working-class setting, but can’t tell if Maguire really showed what Rich’s neighborhood looked like, since I live where it’s set, and thus know too much. Suffice to say, the book takes place in the sort of community white suburbanites flippantly term “the ghetto.” It’s the home of triple-deckers, immigrant families and porch railings festooned with Direct TV dishes. Baby likes.

Rich’s father had been a small man, in both stature and character. He’d been crippled by a depression Rich had found alternately heartbreaking and infuriating. He knew the depression had come about because the man mourned his homeland, his culture, his identity. But that didn’t make it okay.

Rich’s sympathy had run out at puberty. He’d gotten lucky, though, and stumbled into boxing, a pastime built for seething young men looking for the next best thing to hauling off and punching their fathers in the face.

While I understand Rich’s reaction to his father’s suicide being an angry one, I wanted to see something in the narrative challenge his framing depression as a character flaw and sign of weakness. Otherwise it’s just using a stereotype/stigma as a cheap source of angst and drama to make Rich more interesting. It really unnerved me.

I felt jerked around a bit by the pacing. The build up to the cab took two chapters, then the book jumps ahead 10 months. Then there’s a couple weeks in Boston where they knock boots, then he has to go back to San Diego to train, so they break up. Then like two days later he’s back in Boston and all “Nevermind, I’ll fight outta Boston. HEA activate!” And the book just ends. Like the depression and suicide thread, the romantic conflict wasn’t given the space it needed, and so the ending felt rushed and unsatisfying.

Final Assessment: A working-class romance with three-dimensional characters and smoldering sexual tension and sex scenes, but a problematic take on mental illness and uneven pacing leaves this far from being the author’s best work. C

4 Responses to “Taking Him Down by Meg Maguire”