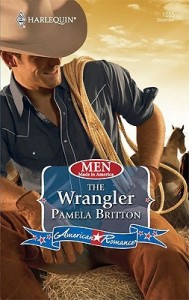 Samantha Davies is a former show horse rider who has shown up unannounced at Clint McAllister’s Montana ranch. Sam is losing her sight after suffering massive head injuries in the car crash that killed her parents a few months ago. Before she goes completely blind, she wants to see a wild herd of mustangs her mother used to tell her about, the mustangs Clint’s family has cared for and hidden from the public for generations.

Clint is naturally reluctant to break tradition for this perfect stranger, but his matchmaking grandmother Gigi, who just knows they’re fated to marry, invites her to stay at the ranch and ride out on the mustang round up in a few days.

Superficially, the two have a bit in common. Both have lost their parents and both love horses. I wasn’t totally sold on the chemistry beyond that. It seemed much more like mutual lust to me. I was even turned off a bit by how many times Clint mentioned pitying Sam for all she’s recently suffered. Empathy, sure, but pity? Doesn’t that imply a lack of respect? Can you pity an equal?

The middle chugs along predictably, they play a bit of kissy-face, Sam goes on the round-up, Clint fluffs his alpha male plumage, they have condomless sex in the woods (no condom = twue wuv) and Sam gets knocked out and needs to be airlifted to a hospital. After all, how else can grumpy Clint show his softer side than to sit by her side in the hospital declaring his love to someone he’s known a week.

All of this is fine, an average book. I’ve read the story before, but the formula works. Where I started screwing my nose up was the final 20 or so pages.

To begin, Sam miraculously regains her sight. Permanently. There’s nothing more tedious than creating a disabled character, only to magically wipe away the disability. Too pat, thank you. Put some damn effort in.

Finally, Sam says the most sensible thing I heard all book – that she barely knows Clint and that they should spend some time apart in their respective homes before rushing into anything. Yes! That’s smart!

Instead of agreeing to a long-distance relationship where they’d work out their future via phone calls before taking the next step, Clint refuses to take her calls. He won’t hear of her spending weekends with him while she works during the week and looks for a job near his ranch. Oh no, it’s all in or nothing. Move to the ranch now, 24/7, or GTFO. Eventually they meet up, she apologizes for being stupid and wanting to take it slow and have some space, and he forgives her. The end.

Final Assessment: Mostly a comfort read that delivers the sort of Americana fantasy this line is known for, but really goes diving into problematic tropes at the end. D

Hot Knight in Paradise by Sofia Harper
Comments are closed.
Love in the Margins is a group romance blog trying to hit on the love stories that represent us all. We welcome discussion and criticism as we read through the stories of those whose lives don’t fit into the neat and tidy box labeled “default.”