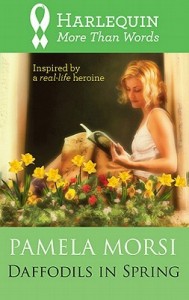 Daffodils In Spring was a 2011 freebie meant to promote literatureforallofus.org and honor it’s founder, Karen Thomson. In fact the cover model strongly resembles a younger idealized Thomson. She doesn’t fit the age of any particular character so I think she’s there to sell us on reading the story. Inside the cover Morsi tries to graft her Americana style onto urban Chicago with mixed results. I admire almost all of the pieces, but I didn’t love the whole. Despite my lack of love a number of elements make Daffodils In Spring worth discussing.

This is a midlife romance, not a late spring fling. It’s heroine, Calla, is a widowed single mother who had a happy marriage. There is no undermining of that history. In one of the only direct physical descriptions made, we find out the hero has thinning hair. Landry is not bitter or a player or disappointed in love. He is a hardworking man interested in the heroine and he makes that known. (He is so simply sketched that I did wish for a bit of backstory on him to balance out everyone else’s but this is a short novella so we’ll let that slide.)

Morsi has written Daffodils very color neutral. There are almost no physical descriptions in the book except for a reference to the “braids and curls” of a teenager with a name (Jazleen) that cues black. This is a book free of skin tone, hair texture and obvious signals. The color of these characters is told in inference. They live in Chicago, where they spend a fair amount of time on their porch steps. Alternative high schools are not an oddity. College is not expected, but is the hoped for result from a long struggle. Women work long hours for low pay. Catching a young man is seen as a good move for a young teen with no future. There are few men on the street. Appearance, church clothes and community are all mentioned multiple times. Everything about this codes to me as white expectation of what black life is. It was a strange fit, this fictional world that was so busy not seeing color even as it cued positive stereotypes up for the reader.

Calla and Jazleen become involved in a literacy program through Landry’s urging and discover common ground to build a relationship on. Along the way we discover that Calla is (of course) an accomplished cook. Thanksgiving is thrown as a veritable block party and all is right in their worlds come Easter. I appreciated a late book twist that added much needed and realistic motivation to Jazleen’s character but found her personality switches extreme. (She is so self aware by the close of the book that I expected her to suddenly be in her thirties.) Calla and Landry both error on the side of saintly. Calla’s son, Nathan, is barely there. He’s more of a plot motivation device than a true character.

Daffodils In Spring is an informercial for book clubs that fails to rise above it’s mission. It’s appropriately priced as a freebie and worth reading as a look at Morsi’s style bumped out of her comfort lane. With a little more conflict and a lot more at stake, Morsi could’ve had something special here. As it stands, it’s a good palate cleanser if nothing in the TBR is working out.

Tell Me Something Good by Jamie Wesley
Comments are closed.
Love in the Margins is a group romance blog trying to hit on the love stories that represent us all. We welcome discussion and criticism as we read through the stories of those whose lives don’t fit into the neat and tidy box labeled “default.”