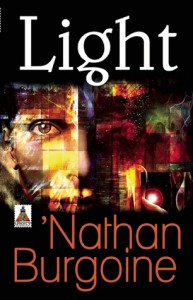 *A portion of this review appears on booklikes.com*

Kieran Quinn is a bit telepathic, a little psychokinetic, and very gay—three things that have gotten him through life perfectly well so far—but when self-styled prophet Wyatt Jackson arrives during Pride Week, things take a violent turn.

Kieran’s powers are somewhat underwhelming but do have a habit of refracting light into spectacular rainbows for him to hide behind. Even so, it’s not long before Kieran is struggling to maintain his own anonymity while battling wits with a handsome cop, getting some flirting in with a hunky leather man, saving some drag queens, and escaping the worst blind date in history. It’s enough to make a fledgling hero want to give up before he even begins.

One thing’s for sure: saving the day has never been so fabulous.

First I’ll offer my disclaimer. Burgione and I also share a publisher. That said, let me dive into this review. This book was so much fun. I mean it. Fun x40andahalf. Kieran is a massage therapist by day and an accidental super hero… by day and night when he uses his telekinetic powers to save the LGBT citizens of Ottawa from a villain with similar capabilities. Along the way Kieran is pressured into blind dates by his best friend, attempts to keep from upsetting his father and annoying the shit out of his brother, and saves the skin of a hunky, potential love interest.

This is Burgione’s first full length novel. I’ve read all of his short stories, so I was really glad to hear he was putting out something longer. I inhaled this book in one day. I haven’t done that in awhile. The pacing is excellent. The plot is excellent. I mean a gay guy uses his powers to save other LGBT folks and pride week from an evil asshole. It’s pretty cool. There’s also a romantic subplot that made me giggle like an idiot. And a lovable dog. Pretty much, Burgione gave me everything I wanted in this book. The writing is so vivid that Light became a piece I instantly wanted to see on film. It’s good.

My only issue and why you’re seeing this slapped with an A- and not an A came from the character Miracle Woman. She comes across as a magical negro. I think she would have been better served if she was white and maybe he’d made Karen, Kieran’s best friend who has more of a fleshed out life, black. I have no doubt in my mind that Miracle Woman is an awesome character, but her actions and motivations missed key points in the black experience that lend to the appearance of the magical negro.

Pretty much we don’t go around helping white people we don’t know when it means putting our own lives and the lives of our families in danger. In this case, I know there was no malicious intent on the part of the author, but I bristled every time she popped up, even though she’s not in the story a whole lot. And about that intent. I think this is an area for any others to consider when it comes writing someone who is other than themselves. There must be some consideration given to the full experience of our characters. If I didn’t know Burgione, this would have pissed me off a lot more. This is me, admitting my bias.

If anyone would like to discuss this further in the comments, please drop us a line. That said, I am jazzed for Burgione’s next piece. Jazzed, I say.

Final Assessment: Should you read it? Yes. It’s a well written adventure with a romantic subplot.

Midnight Crossroad by Charlaine Harris
Comments are closed.
Love in the Margins is a group romance blog trying to hit on the love stories that represent us all. We welcome discussion and criticism as we read through the stories of those whose lives don’t fit into the neat and tidy box labeled “default.”