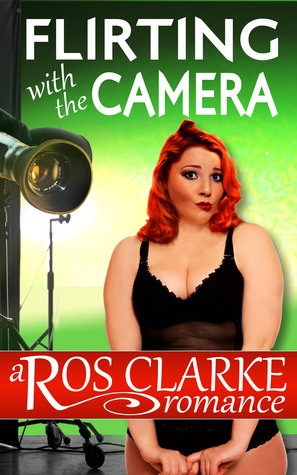 A romance novella with a plus-size model and by plus-size we mean real life plus-size, not fashion world plus-size? I’m sold. When can I read the book? The second I win it from a BookLikes giveaway it appears. Writing the actual review is a bit harder, because I didn’t end up liking it very much.

There were moments. There were good moments and scenes I liked. I liked that Tom and Hattie actually talked to each other—not when it mattered but they did get to know each other on the page. I liked Hattie’s attitude towards her own body even when she was faced with well meaning but undoubtably cruel remarks from her own mother. I liked the idea, but unfortunately the execution lacked finesse.

My biggest problem was that in her attempt to make clear that Tom the photographer was attracted to Hattie physically, the author over-emphasised it. Tom’s thoughts about her curves and full breasts made him sound more like a chubby chaser than a man turned on by Hattie’s personality and body. I get that it’s prudent to remind the readers they’re not dealing with a romance cardboard cutout heroine size extra small, but when it starts to hamper my ability to view the character as a functioning human being with dreams and aspirations, you’ve gone too far. Fat people don’t need to think about their weight all the time; we’re constantly reminded of it in our interactions with the rest of the world. Keeping it at that—at the jibes from Hattie’s mother, the random people looking through an overweight person, and the practical observations of living with a gut and a cupsize bigger than a DD—would’ve sufficed for the book too.

Speaking of practical observations, Hattie’s eating habits. There’s a scene where Hattie and Tom order the exact same thing, except Tom takes his with salad on the side. I took personal offence to this because there are periods of time when I sustain myself with salad alone (practically) and I’m still several stone overweight. This jab at a fat person’s diet wasn’t needed especially because earlier in the book there was a scene where Hattie was having carrots with her leftover casserole. It’d have been different had the author explained Hattie’s dislike, but I must admit at that time I was just listing things I didn’t like about the book.

Moving on from personal complaints to the storytelling failures. There’s a lot of telling, emotional shortcuts and logic gaps. Hattie and Tom both suffer from an acute case of insta-attraction that leads characters to behave like they’re interacting with someone who they’ve known for months or years instead of hours. They start confiding in each other the same day they meet and only the mandatory pieces that construe The Big Misunderstanding are held back, which is particularly annoying. The final revelations aren’t done organically either.

Tom has a few serious seizures in logic too. First of all, he as an professional fashion photographer doesn’t know exactly just how big plus size fashion models are and helpful Hattie has to explain it to him. He also observes Hattie waking up before she’s apparently woken up for the first time after her accident. He also cancels the photo shoot because of the previously mentioned accident but allows Hattie to pose for personal photographs the next day anyway. Failures in logic apparently also come with precognition because Tom knows everyone at the job is sick before he calls them and hears it. Hattie has her out of character and unsteady logic moment when she forgets if she’s wearing waterproof mascara or not.

Then there’s the ending. That last cliché was one cliché too much for a story so short. Instead of showing Hattie and Tom as people who have learnt from their mistakes and are at least capable of growing up to be responsible mature adults, they come across as childish people acting half their age. The baby makes three plot device leads to an unrealistic resolution with word vomit infodumps about their pasts.

Final Assessment: I can’t in good conscience recommend this book to anyone. D.

Source: I won an ebook copy on a BookLikes giveaway from the author.

2 Responses to “Flirting With The Camera by Ros Clarke”