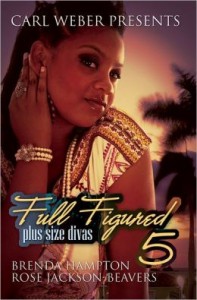 Brenda Hampton’s Who Ya Wit’ 3 makes up the first half of Carl Weber Presents Full Figured Plus Size Divas 5. I have a lot to say about Who Ya Wit’ 3 so I’ll leave the second story of the anthology for a later review. After a number of Kindle samples that didn’t compel me to read more, it was almost a surprise when Brenda Hampton caught my attention. While Who Ya Wit’ 3 is part of an ongoing series, I had no difficulty following the storyline. Dez, a forty something single mother of two, is in and out of a difficult relationship with the younger Roc. The respectability politics at play between them seem to impact them more than the age difference.

Dez is very frank with her sexuality. (While the content is low overall, it’s very direct.) Dez is a woman who has sex when she pleases, with whom she pleases. She knows what she wants and asks for it bluntly. Dez also  harshly judges the sexuality of others. Her first marriage ended when her husband was unfaithful, something she is still very damaged by. There is a married character who is serially unfaithful. Dez has an extremely low opinion of him and his lovers. When Dez thinks her son may be considering an affair she blames all three parties. Yet Roc has multiple sexual partners. Dez pursues Roc while he is living with his pregnant girlfriend. She does not consider herself to be trash nor Roc a cheat and neither does anyone around her. The dividing line appears to be marriage.

Hampton definitely keeps the reader engaged. I was completely uncertain which man Dez was going to end up with, or for how long. Roc is unusually in touch with his emotions and expresses them without apology. This is definitely a Bad Boy tale with a bit of Hood Made Good around the edges. Roc swears, gets high and has children with multiple women. He’s also romantic, in touch with who Dez is and emotionally available. The dynamic between Dez and Roc seems pretty toxic at points, but it’s a different toxicity than I’m used to reading. While Roc is obviously the hero of the series I am not sure he’s the hero of Dez’s life.

Having promised a plus size heroine, Hampton delivers. Dez is a size 14/16 who enjoys eating. She considers losing weight when her self esteem is low but is encouraged by friends to worry more about enjoying her life and less about her size. Dez considers herself attractive, as do the men in her life. She has realistic concerns about money. When she has it she spends it and when she doesn’t she scales back. There are no tycoons in Dez’s world. Everyone works for their cash. I found Who Ya Wit’ 3 to be much closer to the working class contemporary romances I’d like to read than I expected from the pitch. Hampton is not an especially polished author but her conversational style works for her story. (It reminded me strongly of Charlaine Harris.) I think I will be back for another book.

All Beautiful Things by Nicki Salcedo
Comments are closed.
Love in the Margins is a group romance blog trying to hit on the love stories that represent us all. We welcome discussion and criticism as we read through the stories of those whose lives don’t fit into the neat and tidy box labeled “default.”