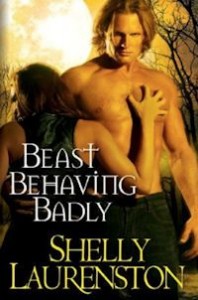 During our conversation on Paranormal as the new Savage, Robin suggested I try Shelly Laurenston. I downloaded a sample of Beast Behaving Badly but found myself unable to commit. Whatever switch her books flip for people is one not found in my circuit panel. Rather than changing my mind about PNR’s place in the genre, Beast Behaving Badly reinforced it. Our first scene finds the hero engaged in a brutal fight. (He’s a hockey player. I don’t speak hockey so we will assume blood spatter is a good thing and move forward.) The heroine immediately treats us to her thoughts on the hero’s ethnic heritage.

“Of course, his saving grace had been that he wasn’t one of the more feared— and, to be quite honest, more unstable— canine hybrids like Blayne, but a rare by-product of species crossbreeding. Specifically a polar bear– lion. Or, as Blayne always secretly thought of him, a mighty bear-cat. A much cuter name in Blayne’s estimation than polar bear– lion. But bears breeding with felines was such a rare thing— and damn near nonexistent more than twenty-five years ago— that they didn’t have any cute nicknames like coydogs for coyote-dogs or ligers and tigons for lion and tiger mixes.” – Laurenston, Shelly. Beast Behaving Badly (The Pride Series) (Kindle Locations 66-70). Kensington. Kindle Edition.

Well then. There follows a dizzying assessment of ethnicities as each character is defined by how much of what heritage they hold. In the SR this would have been depicted as quadroon, mulatto, half breed and such. Here characters are Liger or Polar Cub. Humans are still apparently present but inferior. Our heroine’s father is described as such a sports fan that he’s willing to watch full humans play games. Is this the equivalent of college ball or Little League? It’s not immediately clear. What we do learn is that humans are weak. Bears and Foxes are dominant. Hyenas make good agents. Blood sports are the best sports. (Our heroine disagrees with that last point, but she’s kind of an idiot.)

A secondary female character is introduced and shunned for her desire to catch a profitable match. This tiering of “good” women and “bad” women continues with the inference that hockey players must fend off an endless sea of women hoping to breed (yes, breed) a dynasty. Pressure is placed on the heroine to date the hero for prestige and to punish the bad female character. (Did I mention the heroine is an idiot?) I can’t say the hero is a particularly deep thinker what with giving up millions so he can play for a team because a woman he saw once (ten years ago) is having dinner. Some people would walk up and introduce themselves. He signs a contract in case it leads to eventually finding out her name. Then he does nothing to further his goal except show up to work. But back to the heroine.

Ten years ago the guy looked at her and she decided (based on his glance) that he was a predatory serial killer. She ran screaming from the ice rink and barricaded herself inside her home. (Wait. I changed my mind. The hero is dumber.) Fast forward a decade and she still thinks he’s a killer because of his violence on the rink and her fascination with serial killers in general. (Karen Robards fan?) She hides in a bathroom while he asks to speak with her. Seconds later he’s ripping the door off the hinges. Her response is that a) she won’t pay for the door and b) won’t let him take her to a secondary location and c) forgot she had a cell phone in her pocket to call 911 but d) isn’t dead so maybe he’s not a serial killer after all. Like I said, she’s a rocket scientist.

Fast forward to the obligatory home scenes where we discover our viciously angry sports hero is really just a shy introvert with a gender bias who dislikes company. He surrounds himself with take them or leave them friends. He’s a big ol’ Polar Cat on the inside. (Awwww. Get your furry on, kids! Throw in a sad backstory and… What’s that Lassie? He has one? Good dog!) Meanwhile our heroine is treated to the shock and awe of  her nearest and dearest at the revelation she might know this gladiator of the rink. Despite her protestations that he’s the antithesis of everything she values savvy readers know she’s all talk. She’ll be his latest buckle bunny before you can say Giddy Up!

Laurenston reminded me strongly of Jayne Ann Krentz in her early PNR days with a side of splatter-gore. Nothing in the Kindle sample urged me to read further. Everything begged me to stop.

Final Assessment – I’m sure it’s awesome if you like that sort of thing. DNF