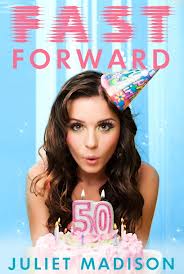 While it had a great premise finishing this book was an absolute slog. Fast Forward is meant for the relative who sends you life affirming cartoons about aging as she sips from her Maxine mug. I wanted Big and I got Freaky Friday. Juliet Madison gives us no one to root for. Meet Kelli, a twenty five year old model suddenly thrust into her own fifty year old body. Nothing makes sense to her, or to us. Eventually the reader understands that Kelli was not shown her future, but one of her possible futures.

Unfortunately Fast Forward is as shallow as Kelli’s twenty something self before it becomes completely enraging. (I admit the enraging aspect was personal in nature and will not enrage most readers. Let’s just say the ending for Kelli’s father held some toxic messages.)  Kelli is unhappy with her less than model perfect figure. While she has not been disfigured in any way, Kelli is no longer lithe. For an up and coming young model this is a disastrous fate. Kelli runs around marveling at the technological changes 25 years has brought, despairing over every less than perfect aspect of her appearance, and waiting to wake up in her 25 year old body. (Spoiler alert: she does.) My first source of major frustration was the way Kelli’s friends and family completely fail her.

“Where’s Grant? I need Grant!” I said, shoving his hand away. “Grant? Who’s … oh, surely you don’t mean Grant, your ex?” “Yes. No! I mean, he’s not my ex!” “Honey, you haven’t had anything to do with him since we started dating twenty five years ago.” William’s expression changed to a frown. “Or, have you?” “Twenty five years ago? But Grant and I … we … he was supposed to propose to me on my birthday.” “Kelli, you broke off your relationship with him, remember?” “I did?” It’s quite possible I’d gone mad. William nodded. “But I proposed and you said yes. And here we are, still happily married after almost a quarter of a century.” Madison, Juliet (2013-02-01). Fast Forward (Kindle Locations 191-198). . Kindle Edition.

Her inability to recall her life is treated by everyone, down to her doctor, as a shoulder shrugging mystery. (Can’t recall half your life? Huh. Here’s your car keys, you’ve got a meeting at three.) Her husband is fairly obsessed with nudge-nudge wink-wink sexting while Kelli recoils at the thought of sex with a stranger. Her children have set up birthday treats that are gendered and self interested. From her mini-me daughter to her (of course) fabulous gay son, Kelli’s kids love her in the distracted way that says she’s on her own. Leaving no cliche unturned, Kelli ends up talking to a pair of psychics. As you do.

Fast Forward’s ending is determined by it’s beginning, not by true character growth. There’s nothing here to suggest that Kelli’s horror with her less than perfect (and oh so old at 50!) appearance is wrong. When Kelli comes to accept herself it is not because she has a deep understanding about body image and our culture, it is because she views her body as the beat up vehicle that brought her to her desired destination. She loves it because she put the miles on it herself. This is a very popular age acceptance viewpoint, but not one I ascribe to. (Resignation is not acceptance.)

My body was a living reminder of my wonderful life. It had done amazing, beautiful things and there was no way in the world I’d prefer to look like a twenty-something perfect beauty with a body untouched by life. Of course, I still valued my appearance, but as I dusted my face with mineral foundation I knew that if I chose not to bother anymore, it wouldn’t make any difference. Madison, Juliet (2013-02-01). Fast Forward (Kindle Locations 3720-3723). . Kindle Edition.

Kelli’s world failed to come alive for me and I’m not sure I’d try Juliet Madison again.

One Response to “Fast Forward by Juliet Madison”