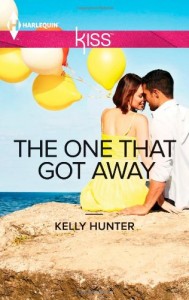 This book may be way old news, but whatever. Kelly Hunter is part of a small group of authors whose books I keep squirrelled away for when I want to read something I’m just about guaranteed to love. I’d grabbed this one months ago back when the Kiss line first launched, but it wasn’t until this weekend, when another book I’d started just wasn’t what I was in the mood for, that I decided to break into my stash and read it.

In some ways this is your typical Kelly Hunter novel. The heroine, Evangeline Jones, is a successful structural engineer who’s in a business partnership with a talented young architect. Her partner suggests they get married so that he can access his trust fund and use that to capitalize their company so they can bid on a major project. As she considers herself ruined for all other men by an intense fling ten years ago, she agrees to the farce marriage. When she goes along with her fiance to visit his family and discovers that his older brother is Logan Black, the man from ten years ago, the plan quickly goes sideways.

the table had given way beneath them and Angie had cut her head on the broken table leg on the way down. ‘I’m okay,’ she’d said, over and over again. ‘Logan, it’s okay.’
Eleven years later and he could still remember the warm, sticky blood running down Angie’s face, running over his hands and hers as he’d tried to determine the damage done. That particular memory was engraved on his soul.
‘An accident,’ she’d told the doctor at the hospital as he’d stitched her up and handed her over to the nurses to clean up her face. ‘I fell.’
And then one of the nurses had eased Angie’s shirt collar to one side so that she could mop up more of the blood, and there’d been bruises on Angie’s skin, old ones and new, and the nurse’s compassionate eyes had turned icy as she’d turned to him and said, ‘I’m sorry. Could you please wait outside?’
He’d lost his lunch in the gutter on the way to get the car; still reeling from the blood on his hands and the sure knowledge that accident or not, this was his fault, all of it.

Much of the conflict is based on Logan’s need to dominate in the bedroom and the anxiety he has about that urge making him an abuser like his father. Unlike a lot of other reviewers, I liked how this was a BDSM novel without graphic sex scenes. I didn’t see the conflict as being a matter of sexual chemistry so much as a matter of how Logan handled himself outside the bedroom, so I don’t think bedroom scenes would’ve done much for the story beyond satisfying my curiosity. I was more interested in seeing how Evie and Logan worked through his emotional baggage as they conducted their long-distance, second-chance affair.

Unfortunately, I ended up disappointed on this front. A Goodreads reviewer called this a “ghost book,” in that the specter of the hero’s father plays a major role in the story. He was an abusive, controlling man and after Logan’s mother left his father, the man shot himself. Recovery from abuse and manipulation is a major theme in the book, but very little of it made sense to me. From his mother leaving him with his father when she left, to a weird confrontation with his mother involving her engagement ring from his father, to his mother getting assaulted at the women’s shelter she volunteers at, it all seemed to be played for angst and drama rather than any sort of meaningful treatment of the issues. His abusive childhood is even looked to to explain Logan’s sexual proclivities, although he is not cured of them nor does the book treat them as wrong or unhealthy. I wish Logan was allowed to define himself and speak of his experiences himself instead of Evie or his mother staging confrontations to prove he’s a good guy and going to be ok.

Despite all that, I really enjoyed the book. Even when the situation or action is patently ridiculous, something about Hunter’s voice just works for me. My husband bought a big bag of Chinese takeout and I wouldn’t put the reader down and eat. The key, I think, is that she writes heroines with a strong sense of self then pairs them with men who see them as equals. Besides her career (and, no, I don’t care how unbelievable it would be for her to own a successful firm at her age) Evie is also in control of her sexuality. Logan isn’t the all-knowing, all-seeing Dom. He’s a mess of worries and vulnerability. It takes Evie’s reassurance and guidance for him to let go in bed, and that’s a refreshing thing to read, even if the execution was a bit wonky. Additionally, Hunter’s trademark humor is still present.

‘Who’s Duke?’ asked Evie as she strode into MEP’s outer office, head down and preoccupied, but not so unconscious that she hadn’t caught the way Max had slapped his phone down on the desk, and there was definitely no missing his scowl.
‘Duke’s the US motocross champion who’s teaching you how to ride your new Ducati,’ said Max curtly. ‘Don’t ask.’
‘Huh,’ said Evie thoughtfully. ‘Am I enjoying the process?’
‘Immensely.’
‘Good for me,’ she said. ‘Because it’s a good idea. I take it that was Logan on the phone?’
Max nodded.
Evie smiled; she couldn’t help it. ‘So what else have I been doing?’
‘Not moping,’ said Max. ‘As a true friend I’m doing my level best to ignore your current state of mope.’
‘Excellent,’ said Evie. ‘Good for you too.’
‘Do you remember how peaceful life was back in the days before we got engaged and I made the idiotic mistake of introducing you to my family?’ Max asked with a great deal of wistfulness. ‘I do.’

Final Assessment: An emotionally-charged read that was hard to put down. Uneven execution keeps it from being a great book. B-

3 Responses to “The One That Got Away by Kelly Hunter”