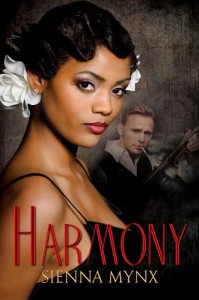 Someone on Twitter, probably Evangeline Holland, suggested I try Sienna Mynx if I was looking for interracial romance. When I was browsing the author’s backlist this particular title jumped out at me because of the attractive cover, but the Jazz Age Harlem setting and black jazz singer paired with a Sicilian mobster is what sold me on it. As far as settings go, this period has it all if you’re looking for self-made men living the American Dream with a generous helping of living dangerously. It’s not at all a common romance setting, for reasons I can’t fathom, so I was pretty excited to read this.

Mynx establishes time and place immediately, opening the book with jazz singer Harmony Jones walking out onto the stage of a Harlem nightclub.

Harmony emerged from stage left. Her stride became grace in motion. Each step set the sequined strands that dangled from her curvy hips to dazzle under the hot chorus spotlights. Milo blew sweet melodies from his sax that trailed her as she crossed in front of the all-Negro orchestra to the microphone. The lights of the club dimmed in every corner and pale faces lifted from their dinners or turned from their jovial conversations transfixed.

Ladies and gentlemen The Cotton Club presents to you, Miss Harmony Jones.

Tonight Harmony is singing with more on her mind and heart than usual. Her younger brother has gone missing after getting messed up in some gang business, so tonight Harmony is hoping to catch the eye of Vincenzio Romano, a Sicilian mob boss she’s noticed has taken a shine to her. If she could arrange a meeting with him, she could try to get him to help her find her brother.

The price for his assistance is, of course, a night with him, because this is a romance novel, but I was surprised at how the evening plays out. Here’s this dangerous man, a man who’s worked his way to the top tier of New York’s underworld after starting with nothing, spending the night with a woman he’s basically emotionally manipulated into coming home with him. He’s had his eye on her for a while and finally has her at his mercy. So what does he do? He puts a record on, tells her that her singing made him love jazz, then dances with her while she sings.

Harmony softened. So did the knot of anxiety twisting through her stomach since the moment she approached the mob boss’s table. Even the maid spying didn’t unsettle her. Nothing could touch her when she sang. When the record stopped, she continued to hum in time with the scratch-and-bump of the needle, having no need or use for a melody other than her own. It took her several moments to realize the dance should have ended. Lifting her head from his shoulder, she tried to pull back. But he held her firm. Their faces were inches apart, and she knew he’d see the blush cover her cheeks.

If alpha heroes were this romantic more often, I’d be a happy girl. Vinnie puts effort into seducing Harmony and clearly enjoys her as much as her body, and it was a lovely departure from the caveman routine so common in romance. Which is not to say that this is a sweet romance or anything, because it so isn’t. There are plenty of open-door sex scenes (maybe even a few too many) and Vinnie is the one on top, so to speak. I just liked how the lead up involved lots of the more subtle forms of lovemaking as well. It gave the hardened gangster a nice tender side while preserving the power fantasy.

Harmony is a self-published book, which I’ve generally avoided after reading books riddled with errors, but it reads like any traditionally-published book you’d find. Mynx has a gift for storytelling with a voice that absolutely captivated me. She uses just enough slang and dialect in her dialog to root the story in the period without it sounding cartoonish. Between the romance and the gang drama, I was completely swept up in the story. Mynx balanced the sexual tension and the suspense perfectly so that I was unable to stop flipping pages to see what was going to happen next.

That said, however, the suspense plot is what ultimately dragged my rating down. While I was reading, everything made sense and I was eager to see how it would unfold. After I finished the book and thought about it for a bit, though, holes started to appear. Harmony behaved in ways that weren’t exactly TSTL, but were reckless, emotional outbursts at odds with her responsible personality. With Vinnie, well, the way the suspense plot unfolds made me question how he ever made it to the top in the first place. I don’t generally read romantic suspense because the romance, the suspense, or both ends up under-developed, and this book was no exception.

Final Assessment:Harmony was a romantic take on the caretaker alpha fantasy (which I don’t usually even go for!) that I couldn’t put down. A tighter suspense plot and more relationship-building would’ve elevated this to a great read. B-

3 Responses to “Harmony by Sienna Mynx”