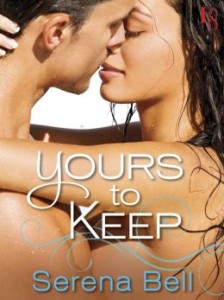 I heard about this book on twitter, when Ridley asked if any Latinas wanted to review a book featuring an undocumented Dominican heroine. I jumped at the chance after reading a review that focused mostly on the hero. He sounded like a jerk, but it was the heroine I was interested in. How is her immigration status handled? Would there be any specific “Dominicanisms” or will she be the generic “Latina,” which often ends up being Mexican in the details? And how will all that combine with the romance?

Ana Traveras is 27 years old. She came to the US at the age of 7 with her mother, her 15 year old brother Ricky and her 12 year old sister Cara. Her father, a university professor, was to follow at a later date, but instead staid behind and shacked up with another woman. While dealing with the turmoil of her husbands abandonment and figuring out how to get back to the Dominican Republic when she didn’t have the money for airfare, Ana’s mother is diagnosed with gastric cancer. She forgets about extending their visas, and when she dies 2 years after arriving, Ana and her siblings are illegal immigran on their own. Ricky had planned to return to the DR as soon as they could, but Cara gets pregnant at 16, and the family decides to stay in Hawthorne, MA. To make ends meet, Ricky works various jobs, Cara has a job in addition to caring for her 3 children, and Ana teaches ESL under the table, as well as tutoring high school students in Spanish. It’s the tutoring that gets Ana into trouble–a new administrator at the high school want all tutors on the recommended list to get criminal background checks. He guesses the truth of Ana’s status, and offers to “help” in exchange for sexual favors. Ethan, a widowed father of one of the school’s students, walks into this scenes and rescues Ana. He’s instantly attracted, and since he’s looking for a Spanish tutor for his son, Theo, offers her the job.

I had a hard time with the Traveras’ background and their family dynamic from the beginning. For one thing, how is it that three minors escaped CPS notice when their mother died?   And why couldn’t their family in the DR help them return? There’s mention on an aunt they kept in contact with–she couldn’t get the extended family to collect the money needed for airfare? I kept trying to figure all this out throughout the story.

I also had a problem with Ricky’s behavior towards Ana.  He’s overprotective and controlling, even going so far as to forbid her to date Ethan because he doesn’t want her with non-Dominican men, and no one really questions his behavior. the only explanation we get is from Ethan, telling his brother about Ricky:

I don’t know. He Dominican. Really traditional, I think.

Who’s tradition is he talking about? Because while sexism and double standards abound in Dominican culture, it doesn’t really play out in that way, with older brothers controlling their adult younger sisters. It’d be weird for parents to behave that way once the daughters are that age. It happens, sure, but in a family that lived what sounds like a middle/upper-middle class life in the DR with an educated father in a large city? Not likely. And Insistence on only dating other Dominicans isn’t a thing in the culture at all. People might prefer dating Dominicans, but there’s no cultural pressure to do so.  Even accounting for the fact that Ricky took over as head of the family as a teen and living in poverty in the US…I’m trying and failing to imagine a community of Dominicans (and we’re told the Traverases live in one) where most people wouldn’t be telling Ricky he’s ridiculous and Ana that she’s an idiot for putting up with his nonsense.

Ricky’s going to hate this whole thing so much–that you’re white. There’s a stereotype that Dominicans are racist, and Ricky isn’t helping to break it.

It would take a series of post to really explain race and racism in the Dominican Republic, so let me just say this: even if racism against white people were a thing (and it’s not), it is absolutely not the problem with Dominicans. World famous baseball players don’t bleach their skin, relax their hair, and wear grey contacts because of racism against white people. A country’s media outlets don’t complain about a black woman with natural hair winning the Miss Dominican Republic pageant because of racism against white people. A country’s courts don’t strip citizenship from everyone of Haitian decent born in the DR since 1929 because of racism against white people.Ricky might not like white people, but describing that as racism is flat out wrong. And no matter how much he might dislike the idea of Ana being with a white man, he should have completely gotten over it the second he learned that Ana and Ethan are engage, instead of criticizing her for marrying someone “just to get legal.” Because even if that was Ana only motivation for marrying, how in the world can he consider that a problem? They’re in the U.S. on expired visas. The easiest way to fix that is to marry a permanent resident or citizen. That’s Immigration 101, folks. That a  family who lived in a community with other immigrants never considered doing that themselves, that they would scorn the very idea of it, beggars belief. There seems to be an attempt to make Ana and her siblings the “good” kind of undocumented immigrants. Sure, they’re here illegally, but they were brought here as children. With visas. And their mother only overstayed because she was dying. And they refused to do things that would make life infinitely easier, like fake drivers’ licenses, social security cards, etc. And marriage for green cards never occurred to any of them. It’s not the implausibility that bother me so much as how typically Romance it is, writing a hero or heroine that’s somehow controversial and then making them squeaky clean in every other aspect to ensure they’re likability. Ana even refuses to talk to a lawyer that the mother of one of her students recommends, a martyr move if I ever saw one. And for all the issues with how culture and immigration are portrayed, it’s adherence to tired romance convention is where Your to Keep ultimately fails for me.

Ethan, as a handsome, widowed doctor, is very popular with the women of Beacon, whom he refers to as “mommies.” He’s pretty disdainful of them–there’s an emotional scene where the mother of a patient is worried about her daughter possible being autistic, and he still manages to be concerned that she’d make a pass at him. And as is so often the case in the genre, his attraction to Ana is due in large part to how different–how humble–she is compared to the women he’s used to.

He was used to beautiful, fit women. Most of them might be manequins, for all the effect they had on him. Ana had broken through the defenses.

It wasn’t the things that were right about Ana that intrigued him, he decided. It was the things that were wrong[…]She wore battered sneakers, not new leather boots like the mommies, and carried and equally battered backpack–not an expensive handbag. And she hadn’t flirted, which filled him with relief and, perversely, a need to win her interest. To find out what made her nervous and hesitant and so thoroughly un-Beaconish.

And how to explain, without insulting her, that her lack of polish, the realness of her, was part of her allure?

I need this trope to go away. While Ethan isn’t the worst example, not by a long shot, every time I see this type of comparison I get the feeling the hero wants someone he can save so he can be in control.

There’s constant comparisons between Ethan’s life and the poverty than Ana’s family experience. Everything from Ethan’s kitchen to his car inspires introspection on their differences, again with the implication that Ethan is some kind of savior. I get the fantasy, and it’s not one I object to, exactly, but does Ana have to be that miserable? The only friend she seems to have is one from childhood who no longer lives in the area. Her family has lived in the area for 20 years–how about a scene with friends at their home having a good time? Poverty and the stress of their immigration status is stressful, to be sure, but there are happy times to be had. There’s this theme throughout the book that assimilation is the key to happiness, and any experience short of that is not worth living.

Cara might not even know who the senator was. It was even faintly possible that she didn’t know who was president. Ana’s sister and brother lived inside a bubble of their own making–their family, their neighborhood, their Dominican friends. Cara was twelve when she came to Hawthorne, old enough that assimilation had been much harder for her than it had been for Ana. Cara’s kids were citizens, but their mother had gotten lost somewhere between her two worlds.

Cara is not “lost between two worlds” in the way that quote implies. She’s an undocumented, poor single mother of three children  who’s fine with the friends she has. Friendships with rich white people isn’t some kind of achievement, but the lack of such friendships is treated as the real tragedy of the Traveras family. Cara and Ricky are too old to be assimilated, while Ana, though assimilated, can’t be happy because her status means she can’t form relationships with non-Dominicans and neither can she relate to other Dominicans, though how it’s possible for her to be the only Dominican in her community who came here at such a young age, or even born here, is a bit of mystery to me. (And Cara knows damn well who the president is. Come on.)

There are some lovely moments in this story, scenes I wish could be pulled out and placed in a different book. The writing shines when it’s just Ana and Ethan flirting and getting to know each other. But those moments are surrounded characters that never quite ring true and tired romance cliches. Even the sex is the best they ever had–Ana only having had one mediocre lover and Ethan never experiencing simultaneous orgasms before. There’s even a near tragedy that brings Ana and Ethan together in the end and makes Ricky accept their relationship.

8 Responses to “Yours to Keep by Serena Bell”