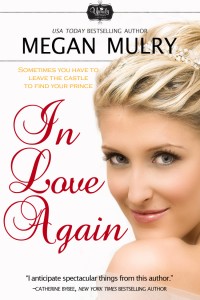 In Love Again is the third book in Megan Mulry’s series, The Unruly Royals. Claire, the aloof and married older sister from the earlier books, is now  on her own. Moving to New York to pursue a fresh start, she finds a man from her past. Ben is at a similar crossroads in his life. His marriage has dissolved into a shared disappointment born of mismatched assumptions. He’s drifting through the days, waiting for something to bring him out of his malaise.

Although I have a soft spot for second chance at love stories In Love Again was an uneven read. On the positive side, despite it’s upper class setting, Mulry’s world isn’t composed solely of caucasians. Characters with different ethnic backgrounds are presented not as underprivileged made good, but as individuals from solid, sometimes affluent, homes. They belong in the world they are inhabiting. Ben is Lebanese, with a large and close family. His heritage is neither ignored nor presented as unique. Ben alludes to the potential racism of Claire’s mother in a scene that leads to one of the few awkward moments in In Love Again. Claire hastens to assure Ben that ethnicity isn’t something that matters to her. Ben never challenges her. Claire, who has been appropriately awkward in her grab for the non-racist ring, isn’t required to acknowledge that declaring it doesn’t matter has it’s own baggage. It’s a moment I wanted them to linger over despite Ben’s easy acceptance.

I loved Claire’s insecurities, her defense of stay at home parenting, her tentative steps toward creating an adult life after years of suspending her personhood. I hated how easy it all was. Claire gets the first job she applies for, because of her connections. She is embraced by all of her coworkers, because of her connections. Later she comments on how she’s trying not to lean on this privilege, yet at the same time she’s openly deploying it. I could forgive Claire for continuing to fall through her life if Ben were someone other than Ben. Ben and I, we didn’t hit it off.

There was a sense throughout In Love Again of missing pieces. (Claire’s mother has remarried? Freddie is a liar?) Most of these are eventually slotted into place but Ben remains a stubborn hold out. When we first meet him he’s unlikeable. For reasons rooted primarily in the past and her own low self esteem, Claire seeks him out again. Suddenly Ben is utterly accepting of anything. Even when it’s revealed he has good reason to resent Claire he doesn’t. When Claire repeats a sin of the past, even more egregious in light of her maturity and their past experience, he shrugs it off. When Ben takes Claire away for a weekend and a family member hijacks the night, it’s fine with Ben. Everything is fine with Ben. He wants Claire because he used to want her. He hasn’t anyone else at the moment and Claire is the heroine so they’re meant to be.

The easiness continues as Ben charms Claire’s troubled daughter, introduces her seamlessly to his family, and establishes himself at the center of her life. (He’s also very rude to a waiter. It’s meant to read as passion but it put me back to disliking Ben intensely.) Ben plays guitar to make himself interesting. He doesn’t convey any sense of musical obsession. He doesn’t practice around Claire. He chose his day job to be lucrative but is bored senseless by it. While Claire is reinventing herself and reinvesting her in family (another road easily cleared) Ben is just acquiring Claire. He has six sisters, one with a family member in crisis, but they’re almost invisible. Ben feels aimless.

Late in the book Claire becomes quite angry with her sister in law. An apology is quickly offered but the advice found objectionable wasn’t wrong. This too was a moment that could have shown the family divide but instead was quickly smoothed. In Love Again’s true conflict is primarily off the page as Claire’s ex complicates her life before being speedily dispatched. If Ben had been less unquestioning in his acceptance, if Claire’s interpersonal conflicts had led to her being called out on her own bullshit, I think I would have loved this book instead of liking it. As it was, everyone was a bit too perfect and isolated for me to fully embrace them. Even with these issues considered, In Love Again is my favorite of the series.

Heart Murmurs by Suleikha Snyder
Comments are closed.
Love in the Margins is a group romance blog trying to hit on the love stories that represent us all. We welcome discussion and criticism as we read through the stories of those whose lives don’t fit into the neat and tidy box labeled “default.”