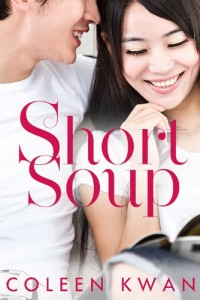 No hard sell was needed to get me to pick up this novella. I adore the friends-to-lovers trope to begin with and an Asian hero and heroine in an Australian story written by an Asian author? Yes, please. This is exactly the kind of book I want to see more of in romance. Unfortunately, I ended up liking the idea of the book more than the book itself.

Chinese-Australian Toni Lau and Dion Chan have known each other from infancy. Their parents are friends and the co-owners of a Chinese restaurant in a seaside town a few hours north of Sydney who raised the two only children together like cousins. The two remained close friends throughout high school then drifted apart after graduation. Toni left town to attend university in Sydney before marrying and moving to London while Dion stayed at home and kept surfing and working in the family restaurant. Divorced at the young age of 27 after her husband cheated on her with a co-worker, Toni stops by her hometown for a visit before heading to Sydney to start over.

Time has changed Toni, Dion and the town. After pouring herself into her relationship, desperately trying to please her critical husband, sensible, responsible Toni is full of doubts and regrets as she licks her wounds. Once the Peter Pan shtick got old, Dion left for Hong Kong and Beijing to get serious about cooking Chinese cuisine. Changing demographics has made it so the family eatery is no longer the only Asian restaurant in town and it needs renovating and fresher cuisine to reverse years of declining sales. Dion’s relaunching a newly renovated Happy Family, but his father isn’t fading into retirement gracefully. To add to all this tumult, Toni and Dion seem to have misplaced their easy friendship and replaced it with sexual attraction.

This is just a great setup for a romance. In a time where everything’s gone ass over tit, what’s more appealing than a familiar face, right? The bones of this story are great. Kwan makes the couple part of a community. They each have friends and past romantic entanglements and they have complicated but loving relationships with their parents. Toni and Dion have to weigh their long friendship against the risk of romance souring it. There’s a lot to work with.

But it all felt flat in the execution. Physical arousal stands in almost entirely as evidence of their attraction. Instead of getting to see how two friends related to each other via conversation and action, I saw a lot of the characters speaking their backstory aloud and a bunch of details on what their body parts were doing or wanted to do as a reaction to the other person’s proximity. Most books use shortcuts some of the time. We all know that arousal signifies attraction in romance. But you can’t use them all the time without a book starting to feel a bit thin. I really wanted to get more insight into Toni, Dion and Toni and Dion together.

Short Soup’s set in Australia and is published by an Australian publisher. Most of the slang was self-evident even if I didn’t recognize the term. This scene, however was kinda of hilarrible to my USian ears.

“Hey, you looking to score some dope?” Zed muttered out the side of his crusted lips.
Dion stiffened. “Shit, no.”
“Dude, only asking.” Zed lifted weedy shoulders weighed down by a smelly leather jacket. “You used to ring me up all the time.”
“That was ages ago.” Dion could feel himself quivering with anger. Jutting out his jaw, he glared at Zed. “I don’t do that stuff any more, got it?”
The guy held up his hands. “I get it, you’re clean. Good for you, man.”

Dope! I read this and thought, “Shit, that’s heroin. Dion’s past that’s been hinted at is a bit darker than I expected. I wonder if we’ll see how he got clean.” Further down the page, though, I realized something might be getting lost in translation.

He shrugged. “Just some guy I used to know.”
“Ronan says he’s a dope dealer.”
His head jerked up. “Oh, so now you think I’m smoking dope.”

It’s pretty clear that “dope” refers to marijuana here, which is something only anti-drug crusaders who’ve never done anything stronger than aspirin call it in the US. Every time it came up, and it’s kinda harped on as part of what a “mess” Dion had sunk to, I pictured a DARE officer saying it, and I giggled. Oooh, such a dark period, smoking weed on the regular. I’ve smoked joints while golfing with my father, and my mom’s drug advice to me in high school was “don’t get caught with too much on you,” so this plot was kind of funny to me. This scene likely rings truer for people from stricter families. Clearly I’m a degenerate.

Final Assessment: A cute novella with likeable characters. Tells too much, though, and has a “babylogue” that creates more issues than it ties up. C