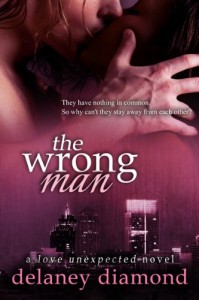 While browsing ARe one night, where I very rarely go to look for books, I stumbled across The Wrong Man. The blurb caught my eye immediately with the ad exec heroine and construction foreman hero. To begin with, blue collar heroes are like catnip for me. You show me a hero who works with his hands, and I’ll show you my grabby hands. Then there’s the corporate executive heroine. I wanted to see if she made more money that he did and how that might work in a romance genre where it seems the hero must always be the one to provide the economic stability. ARe posts excerpts right on the book page, so I scrolled down to take a gander and was hooked by the playful tone pretty much right away.

“You’re one of those women who can get out of hand, so I have to keep you grounded. You have a…cómo se dice? Oh, I remember.” He snapped his fingers. “You have a Napoleon complex.”
She shot him her Are-you-for-real? look. “I don’t think so.”

“Yes, you do. It’s because you’re so short.” He sliced his hand horizontally from his nose over the top of her head. “See?”

Talia stood up straighter, as if she could grow taller by sheer will power. “I do not have a Napoleon complex, and anyway, I’m pretty sure that only applies to men.”

He looked amused. “No, I’m sure the complex applies to women, too. I have a perfect example standing right in front of me. How’s the weather down there?”

She cut her eyes at him and continued searching for food.

“No response? I’m so disappointed,” he said.

“I’m ignoring you for the rest of the day.”

The Wrong Man is sort of an enemies-to-lovers story, only not really. Talia Jackson knows Tomas Molina through a mutual friend and they’ve been running into each other at social gatherings for a while. For whatever reason, whenever they’re near each other they start arguing and bickering. It’s never anything serious – this isn’t an HP where the hero constantly dresses down the heroine for something her slut mother did – just little jabs and cheeky retorts.

The two of them come from completely different walks of life and seem to have nothing in common. Talia is a black woman raised by her wealthy, politically-connected grandmother in a grand home in Atlanta. This grandmother pushed her to be the best, sending her to good schools and connecting her with people who could advance her career. Success on her grandmother’s terms was a prerequisite for her affection, and Talia has grown into a woman who’s intensely focused on her career, making VP before 30, but not quite as successful at relaxing in social situations. Tomas, meanwhile, is a Cuban immigrant who floated in on a raft before working his way up the construction business ladder to foreman. He had a loving family, has a wide network of friends, and doesn’t take himself, or much of anything, too seriously.

Together again at her friend’s housewarming party, they’re falling into their usual routine, only it’s different this time. Before, Talia was married, and not very happily. Now, she’s divorced, and she starts seeing Tomas in a different light. Where before she might have rolled her eyes at the playboy who won’t just be serious for once, she finds herself laughing at his antics this time, surprising them both. She discovers that she envies his laid-back playfulness after all, and he finds out that he kind of likes that he can make the “Ice Queen” smile.

Thus begins a dance between all-business Talia and no-strings-attached Tomas. Both of their friends warn them off each other in no uncertain terms, but you know that never works in these books. Over the course of the next few weeks, silly teasing turns into maybe flirting which turns into definitely flirting that ends with Talia staying late to clean up after a cookout at Tomas’ house. The progression of their romance is kind of adorable. It’s all flirting and mischievous looks and nice gestures, and it just charmed the pants off me. It’s courtship, and I don’t get to see that all too often in romance.

The overall tone of the novel is a light and fun one, but there’s some drama to keep the tension going. A fight with her ex early in the novel made me cringe, it was so vicious. There are some hurt feelings after they hook up when they both say things they don’t mean in a clumsy attempt at playing it cool. Talia’s grandmother and the unhealthy relationship Talia has with her also adds some twists. Diamond does a great job using these moments to add complexity to the characters and have them resolve their issues in believable, easily-relatable ways. There are no cardboard villains or convenient plot machinations. They’re all just imperfect people floating along in their feeling from time to time.

My few complaints would be that you can tell this is the second book in a series from the unnecessary details offered for their friends Shawna and Ryan, and that the ending is about as neat as you could make it. Neither of these were so egregious that they ruined the book for me, but they did dull the finish a bit. In fact, his bit near the end almost makes up for these complaints entirely:

“I want my child to have my name.” He spoke in a calm, firm voice. The tone he always used which meant he wouldn’t accept counter arguments.

“Your name will be on the birth certificate.”

A pleasurable warmth seeped into her bones. “Hypothetically speaking, if we got married, I wouldn’t take your name. You’d be lucky if I hyphenate mine.”

He dropped his hands and stared at her in disbelief. “You’re going to tack Molina to the end? Whenever I see those names, the second name looks like it’s going to fall off.”

“Well, that’s what we’re going to do. Be thankful I’m even marrying you.”

Not only is he cool with her making more money than he does, she doesn’t take his last name. I’m not awarding Feminist Bonus Points or anything. I’m just glad to see some diversity in the gender roles department.

Final Assessment: A fun, romantic contemporary that kept a smile on my face the whole time I was reading it. B+

4 Responses to “The Wrong Man by Delaney Diamond”