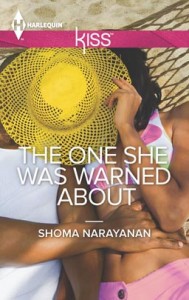 Shoma Narayanan was suggested to me by Suleikha Snyder, and it’s a good match of author and reader. I fell completely in love with the heroine of The One She Was Warned About. Shweta is professionally confident but personally uncertain. On the edge of pushing for marriage to a man more suitable for her father to marry, she runs into a childhood frenemy. Nikhil is the boy next door made good. Once an illegitimate young troublemaker, he is now a successful business owner with ties to the entertainment industry. It’s a boy next door story.

Shweta is less than impressed with Nikhil’s success. While she’s pleased for him, she is frustrated by his refusal to set aside the pain of his past and appreciate what he has. Shweta does not see Nikhil’s return to her life as a lottery ticket she dare not misplace. She sees Nikhil as a new and interesting option. While her own insecurities and hot temper drive some of their disagreements, the main source of their conflict is Nikhil. Until he has moved beyond his childish view of his parents and his life, Shweta cannot trust him as her partner. 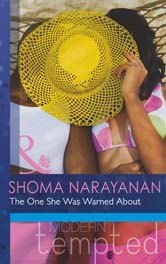 This sweet romance was consistent in characterization and tone. The office relationships were as believable as the family ones. There were a few points in the book that felt like they had been included for the western or white reader. Narayanan explains general customs at Diwali in one point, yet ignores them at another. It threw me out of the book to have the author explaining something that would be so basic to the characters. Romances with a white focus do not explain our common holiday practices. An author might indicate how her characters deviate from or cling to the norm, but a full explanation is unusual. Aside from those awkward moments, The One She Was Warned About caused me to purchase more by the author as soon as I closed it.

I came across several versions of cover art for The One She Was Warned About with interesting differences. The first cover (top left) is for the American market. To my eyes, it appears Nikhil has been lightened from the Mills & Boon version made for the UK (center right). It could be a combination of the dark title coloring and the reduced surface area, but the Mills & Boon cover more clearly indicates a non-white couple to me. The version for the  South Asian market (lower left) goes in a different direction. Instead of their faces being completely hidden by the yellow hat, only their faces are visible on a yellow background. The cover gives me a different expectation of the book. It seems menacing. I would expect this book to contain significant danger for the heroine and possibly include domestic violence. There’s a YA after school special vibe going on. It’s interesting to me that this reads as a romance cover in other markets.

Final Assessment: Solid category read with an engaging heroine. A-