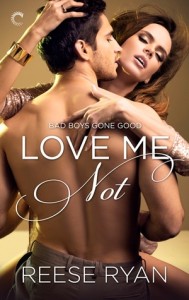 I am going to start this off with a mea culpa. I really meant to have this review done for Monday, since I received this as an ARC and that was its release date, but I spent the week off playing video games and didn’t want to stop. So, here we are. I promise we’ll get back on our three review a week schedule soon.

Anyways, I first tried Reese Ryan back in August, not long after we launched the blog. I was making my quarterly visit to Carina to see if anything appealed to me, when the black couple on the cover caught my eye and the book leapt into my cart, sample unread. I liked but didn’t love it, giving it a C+. Kind of surprisingly, the author emailed us to offer a copy of this book, set in the same series but taking place before the earlier published book. I found this book’s heroine intriguing when she was in Making the First Move, so I happily accepted her offer.

Like the first book in the series, Love Me Not is heavily focused on the heroine’s journey. The book follows bartender and aspiring artist Jamie Charles through a tumultuous period in a life that’s never been easy on her. She has auburn hair she dyes jet black, a nose ring and a wide assortment of tattoos. She wears combat boots and paints her nails black. Her awful childhood included a father who deserted his family, an addict mother who wasn’t around much and getting raped by her mother’s boyfriend. When she finally ran away at 12, her friend Melanie convinced her parents to take Jamie to live with them. Now 30, she’s getting by in her own way. Her biological mother hasn’t been in contact for over 15 years and Mel’s mother, Ellie, is who she calls Mom. Then her mother suddenly waltzes back into her life one day, wanting to pick everything up where they left off, and Jamie starts to lose her grip on the peace she’s worked hard for.

The hero of the book is an ad exec named Miles Copeland, and he meets Jamie the day she runs into her mother. He’s in Cleveland on business and stops in her bar for dinner that night, in what makes for a sort of unusual meet cute. While Jamie immediately finds him attractive, she’s not at all about getting hit on by a customer and finds him irritating. There’s not only no insta-lust, she’s just flat out rude to him (And I couldn’t blame her. Anyone who calls you by your first name off your name tag needs to take a seat.) As he continues to visit the bar over the next few weeks and months, he starts to grow on her, and they form a sort of friendship.

The major plot theme is Jamie getting a handle on everything dysfunctional about her life, and the book does a reasonably good job of it. There was pressure from her friends and Ellie to reconnect with her mom and hear her out, but I didn’t feel like anyone was pressing her to forgive her. Jamie’s mother was a fairly nuanced character and was a mix of sincerely regretful and thoughtlessly selfish. Jamie reacted to her mother’s apologies with a lot of anger, and the book didn’t make her apologize for it. By the end, her anger was spent, but it was replaced with resignation, not forgiveness, really. There was no neat bow on their relationship, and I respected that.

What was less successful for me was the way the author drew her relationship with Miles. The book reminded me a lot of Victoria Dahl’s book Lead Me On, where a heroine trying to distance herself from her poor upbringing sleeps with but resists committing to a hero who’s in a blue collar sort of job. In both of these books, the heroine is the one with the emotional baggage that has turned them into serial daters with a fear of commitment and the hero is the one willing to wait her out and tame her with his love, which is a sort of reversal of the gender roles in romance.

This book differs in two ways, though, that didn’t work well. First, much of the romantic conflict was perched on Jamie feeling that commitment leads to getting hurt when things don’t work out and the other leaves, so she’s decided she’s incapable of love. That sounds a lot more like an outside diagnosis to me than the sort of lies a person would tell herself, so I find plots like these frustrating. There’s no mystery to why she can’t commit. She’s told you already. Now you just have to wait for her to say “I love you.” It’s a shortcut.

Second, I don’t feel like I got to know who Miles was. He was incredibly handsome and the perfect listener, and I could see why Jamie wanted him, but I didn’t see why he was so smitten with her. He kept saying that he loved how she called him on his bullshit, but I never saw him say or do anything that Jamie called him out on. He was a bit of a too perfect Gary Stu. A dark past doesn’t substitute for a personality. (Also, his past included guilt over a dead girlfriend, which the previous book’s hero also had. The author might want to rethink this “girlfriend in a refrigerator” thing.)

Final Assessment: All told, I liked this more than her other book. The writing was tighter, if still somewhat more plainly told than I like, and I enjoyed seeing the heroine grow as a person and grab a little more happiness for her life. C+/B-

(PS Can we talk about how much I dislike the cover? Not only does it completely misrepresent the heroine to the point of false advertising, but it looks like a Loveswept cover, which are completely bleh. I hate the narrow range of femininity displayed on romance covers. God forbid you find a tattooed woman, or make her the focus of the cover. Ugh. Ugh, I say!)

11 Responses to “Love Me Not by Reese Ryan”