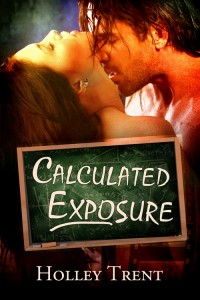 She went to Ireland looking for a muse, but found a mathematician instead.

Photojournalist Erica Desoto has spent five weeks in Western Europe hoping for inspiration, with just one decent photo to show for her effort. And that shot was accidental. As her sabbatical comes to a close, she’s ready to give up on her portfolio altogether. Serial dater Curt Ryan isn’t looking for love…or even a distraction. With a PhD to finish and his family under intense scrutiny by the Irish press, he already has too much on his plate. But when his godchildren barrel into a pretty American who just happens to live a few hours from where he studies in North Carolina, a new distraction is exactly what he gets. Back in the States, Erica and Curt initiate an incendiary no-strings-attached affair that inevitably has both questioning what they want…and what they’re willing to do to get it.

Mathematician Curt risks emotion clouding his logic. For Erica, keeping her muse close may mean embracing the exact things she ran from as a young woman. Is exposing their hearts a calculated risk both are willing to take?

First let me do that whole full disclosure thingy. Holley Trent and I are interweb friends and I found out about this book through my following her on the webs because of our interweb friendness. I’ve had this story on my kindle app for a long time and last Friday just felt like the right time to whip it out.

This is one of the most realistic romances I’ve ever read. While most romance set the couple up in a way that makes it obvious that their whole lives are bending so they can be together, Curt and Erica’s lives do not pause for a moment so they can hook up. Erica has to work around her job and a shitty boss/ex. Curt is dealing with huge family drama, that again is realistic.(His mom is majorly effed over at her job and he’s trying to help her get her life back together) Curt is also being courted by a think tank for his big brain and procrastinating in getting back to them about their offer. This takes up a bit of his pages.

Curt and Erica think realistic things about their families, their friends and their work. This was very refreshing. Even when people are going through a shit time in a lot of romances, there’s usually an upbeat tone to their wallowing to keep them from sounding like assholes. But Trent just let Erica and Curt bitch and it works. You kind of want to hang out with them because of it.

I liked Erica. She’s curvy and Cuban, and there is no apology for her background or her figure. Yes, please. She’s very funny and has a huge heart, but she’s not a doormat. After leaving her family in Miami and dealing with a rough time getting on her feet she’s working a job that she hates, under the supervision of a man she used to sleep with, who is used to manipulating her. This affects her relationship with Curt, emotionally and sexually. I think Trent handled this very well. Erica’s emotional struggles felt real, but they didn’t weigh down the story. You root for the end of this horrible job situation. It was also nice that Curt didn’t act all weird when Erica pumped the brakes about certain things.

Curt is an interesting hero. He’s Irish and a bit of an intellectual thug. He’s kind of a dick at first, but he knows it. HOWEVER, Trent manages to make his dickheadness work by 1) explaining that it’s something that Curt is trying to work on. 2) making Curt internally apologetic when he says something crappy, followed by having him actually apologize. My issue with Curt ties into my overall issue with the book. Curt pulls a final dick move. It’s not a huge deal considering the circumstances, but I wanted Curt to work a little harder to get Erica back. Not some grand gesture that would have been totally out of character, but he just slides back into her good graces with -.05 effort.

Which brings me to my biggest problem with the story. I wanted a bit more conflict surrounding Erica and Curt. Obviously the HEA is a gonna happen, but I like that moment when my heart clenches and I feel like THIS MIGHT NOT WORK OUT!!! Their black moment is real short and quickly resolved from the reader’s perspective. I think they are apart for a little chunk, real-time in the story, but it reads like no time at all. I just wanted a taste more angst. Just a taste.

Oh yeah and the sex is very hot. VERY HOT! HOT!!!! I enjoyed the sex scenes a lot.

Final Assessment: Should you read it? Yes. Especially if you’re in the mood for something different that’s light on the angst. Grade: B+
Series: There is one other story with related characters and another on the way.

Rivals in Paradise by Gwyneth Bolton
Comments are closed.
Love in the Margins is a group romance blog trying to hit on the love stories that represent us all. We welcome discussion and criticism as we read through the stories of those whose lives don’t fit into the neat and tidy box labeled “default.”