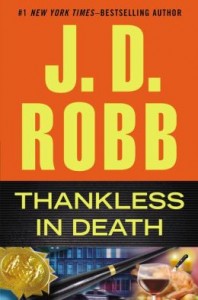 While many have given up on the In Death series I wasn’t ready to throw in the towel. They’re a comfort read – the book equivalent of flipping to a favorite syndicated show and hoping for an episode you haven’t seen. I read In Death books to spend time in Eve’s world and check in with favorite characters. I’ve always appreciated how the series keeps it focus on the dead and the detectives, rarely lingering over the crimes themselves. Thankless In Death breaks this unspoken promise.

The killer here is a far more familiar figure than Eve has been dealing with lately. No clone plots, no multi generational vendetta. Eve’s chasing an angry Nice Guy while he murders everyone who failed to appreciate him. We spend far too much time in Nice Guy’s head. When Eve stands and pictures the crime scene, we already know what happened. There’s no revelation in her thoughts, only reruns for the reader. There’s no mystery, the killer and his motivation were shown up front. I spent far more time with the murderer than I wanted to. His contemplation of innovative torture techniques was the opposite of comfort reading.

Eve was unsatisfying as well. Thankless In Death finds Eve stagnant. She has cast aside career ambition, feeling that she is best suited for the rank and role she plays. This limits her character. An Eve who looks at the murder, bangs her husband, reflects on murdering her dad and then locks the bad guy up is a disposable Eve. Expanding Eve’s world, increasing her personal responsibilities, these are the elements that have sustained In Death through a shocking number of installments. Eve has become a media figure in her own right, Rourke’s Cop. She’s grown complacent with that status. She has universal and abundant praise from those around her. No longer fighting for worth, Eve has earned it through her actions and connections. What’s left for Eve (and the reader) to explore? With a new In Death right around the corner I’ll give the series another installment. If Eve isn’t interested in moving on, I might have to do it for both of us.

Final Assessment: Robb dials up the murder for an ultimately unsatisfying C read.

Series: Book umpteen million for In Death. You can jump in anywhere.

4 Responses to “Thankless In Death by J.D. Robb”