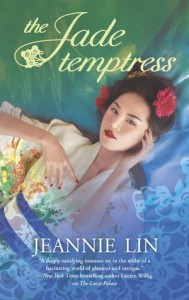 The Jade Temptress technically has a March release date. I’ve stopped advance reviewing because people find it annoying, but Harlequin has a history of early release in it’s e-store and I wanted to talk about something I liked for a change. We’ll keep it spoiler free. A few pages in to The Jade Temptress I realized I hadn’t read The Lotus Palace. (Apparently I confused two Lin titles.)  While I imagine the emotional punch might be greater if the series is read in order, I didn’t find it necessary to enjoy the tale.

Mingyu is wonderful. She is essentially a slave with extreme privileges. Bound by debt to her foster mother, Mingyu alternates between her duties as an entertainer and her obligation to obey the dictates of her house. Mingyu is keenly aware that her life of silks and power hinges on keeping the powerful men of the district interested. She is also fiercely ambitious. Having had the option of being purchased from her house to be her protector’s concubine, Mingyu chose to remain as she was. Outwardly demure and acquiescent, Mingyu directs the lives of those around her skillfully. She is not emotionless, but she is highly controlled.

Equally controlled is the town constable, Wu Kaifeng. As ambitious as Mingyu, Kaifeng seeks not power but peace. Kaifeng is a self made man from difficult beginnings who approaches the world scientifically. He dreams of a quietly responsible life but faithfully performs the duties he has fallen into. Mingyu is the flame to his moth, difficult to ignore and almost certain to be ruinous. For a time, it seems Kaifeng is right, as death threatens to destroy everything they have worked for. Divided by class and preference, a failure to control their emotions would end them both.

I enjoyed The Jade Temptress. Toward the end there was a bit too much deus ex machina for my taste. Mingyu dispenses too easily with those I felt would have treated her violently. While I felt the economic constraints on the characters were well handled overall, there were Cinderella moments I disagreed with. I’m not sure there would have been a better way to handle it, but I wanted one. Ultimately The Jade Temptress gets a strong recommendation from me. Due to personal events I stopped and started half a dozen books before Jeannie Lin caught my attention. She held it easily right to the final page.

Final Assessment: Preorder it, because it’s worth reading. A-

Series: Sequel to The Lotus Palace and might be even stronger paired with the prior book.

It Happened One Midnight by Julie Anne Long
Comments are closed.
Love in the Margins is a group romance blog trying to hit on the love stories that represent us all. We welcome discussion and criticism as we read through the stories of those whose lives don’t fit into the neat and tidy box labeled “default.”