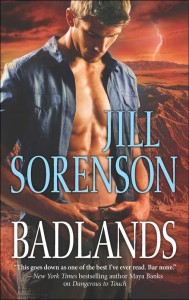 I’m a heroine-centric reader. As much as romance is about two people coming together, in an m/f romance the hero just sort of blends in with rest…it’s the heroine that makes or breaks a story for me. I can count on one hand the number of heroes that stand out for good reasons, and Owen, of Jill Sorenson’s Badlands, has been added to that list.

This book is the third of a series,  but can be read as a standalone. Penny Sandoval and Owen Jackson met when they were trapped under a freeway collapse in the first book, Aftershock—Penny was the disowned, pregnant teenage daughter of LA’s conservative mayor and Owen was a prison inmate and member of the Aryan Brotherhood. Badlands takes place five years after that—Penny, reunited with her family after the earthquake, has recently graduated from college and plans to start working soon and making her own life for herself and her 5 year old son, Cruz. Owen, having finished his sentence a year after the earthquake, is now working as Penny and Cruz’s bodyguard—her father is running for President, and as the single mother daughter of a family-values Conservative  candidate, public interest is keen. The book opens at the Republican National Convention, where Penny is the opening speaker. As soon as she gets on stage an alarm goes off, Owen hustles her and Cruz out the building, and they’re kidnapped by men working for the Aryan Brotherhood, one of them Owen’s recently paroled brother, Shane.

I won’t say much more about the plot. I think it has all the action and drama one would expect from a romantic suspense without it feeling unbelievable. I especially liked how Owen wasn’t the typical “alpha” male here—he’s strong and capable, but he’s not invincible. He loses some fights and he gets outsmarted sometimes, which works for me. We all know that the good guy is going to win in the end but it’s more exciting when it looks like it’s not a sure thing. It’s called suspense for a reason, after all. I find characters like Owen—“beta” heroes—much more realistic, and I’ve noticed that they often have the same characteristics as kick-ass heroines—tough but still allowed to be vulnerable. He’s also dealing from the trauma of being raped in prison and has trouble with physical and emotional intimacy. It’s because he was a target in prison that he joined the Aryan Brotherhood—he wanted protection, and he didn’t care where that protection came from.

Owen wasn’t a white supremacist, but ideological differences hadn’t made it difficult for him to fit in with the gang. No, he’d adopted their ways easily. He’d been poor white trash his entire life. The men in the Brotherhood were just like him. They were the boys he’d played with after school, the desert rats with the faded clothes, the trailer park kids who came from nothing and ended up the same way.

Sorenson does a good job of acknowledging that even though Owen was a victim his past actions were still wrong, and it makes his redemption believable to me.   We’re not asked to believe that someone with horrible beliefs can truly change (my main problem with redemption stories); neither are we told that because Owen had “good” reasons for the things he did he doesn’t have to atone for any of it. Throughout the series Owen works at it, making every effort to be a decent person and rise up from where he came from, but still hating himself for his past, for the things he has to do to survive his current situation with the kidnappers, and for what he feels are his weaknesses and failures. He blames himself for not stopping the kidnapping, and he hates what he calls “his sick, dysfunctional mixture of love and hate” towards his brother.

Owen’s feeling of guilt and inferiority makes it impossible for him to consider a relationship with Penny, even though he’s wanted her for years. He’s so convinced he’s not good enough for her that he misses every single one of her signals. Penny has the same problem—she wants Owen but because he gives no signals she assumes he’s not into her. She also knows how much her family would disapprove, and while she doesn’t intend to let that stop her long term, she’s been so busy with school and raising her child that she’s found it easier to bite her tongue and be the dutiful daughter in gratitude for her parents taking care of her and Cruz since the earthquake. While she and Owen are on the run from the kidnappers, Penny makes her feelings known, and when it’s clear that Owen feels the same way, she pushes for more, and gets frustrated when he holds back:

“I just want what’s best for you.”

She knew what that meant. Anyone but him. “You sound like my father.”
When he flinched, she suspected they’d discussed her. They’d made decisions without her input.
She fell silent, frustrated with the men in her life. And with herself for letting them set the tone in their relationships.

I like how Penny asserts her desires and works with Owen to get him to consider being with her while still respecting his boundaries. He’s a rape survivor, has problem handling physical contact, and when the relationship becomes physical they talk honestly about his triggers and what will and won’t work for him. There’s no bulldozing followed by magic healing though PIV sex that we see in romance featuring female trauma survivors—the emotional healing and trust starts happening before Owen can have sex, which make the sex scenes between them both sweet and hot. There are also a few  light, tension breaking moments throughout the story, which, in addition to being adorable and making me smile, give me the sense that there’s more to this young, relatively inexperienced couple than the adrenaline rush resulting from all the dangerous situations they’ve found themselves in.

My one real issue with Badlands is the involvement of Janelle, Shane’s ex, and a man involved with the Brotherhood. He kidnaps her, and I was expecting a major confrontation. And while there was one, it could have happened without Janelle…the whole thing felt like a set-up for another book.  I like her, but she needed to serve a bigger purpose to the story if she was going to spend so much time on page.

Final Assessment: No alphaholes in sight. Read it. B+

Veiled Desire by Alisha Rai
Comments are closed.
Love in the Margins is a group romance blog trying to hit on the love stories that represent us all. We welcome discussion and criticism as we read through the stories of those whose lives don’t fit into the neat and tidy box labeled “default.”