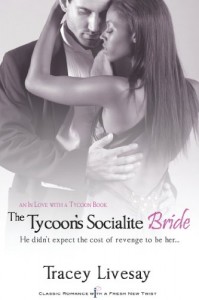 Because my favorite kind of decision is a bad decision, I was browsing Net Galley the other day instead of reading one of the hundreds of books I already own. I browsed right on past page after page of romance covers when this one caught my eye with what appeared to be an interracial couple. If the title didn’t tip you off, this book is part of Entangled’s version of Harlequin’s Presents line of books, and those are about as close to a guilty pleasure as I get. Couple a Presents-style high drama read with a black heroine and white hero and I had to have it, towering TBR be damned. Who can say no to a marriage of convenience between a blue blood socialite and a status-seeking self-made man? (Spoiler: Not me.)

Our hero is Marcus Pearson, a ruthless businessman who has yanked on his bootstraps to become a real estate tycoon. Although he’d been operating in San Francisco, he’s back in Washington DC where he spent his childhood to work on a proposal to buy the hotel owned by a man who had slighted him and his mother. He meets DC socialite and senator’s daughter Pamela Harrington when she approaches him during a golf game to ask him to sell her a property he owns that houses a women’s shelter she volunteers at. He rejects her at first, but reconsiders after finding out that the hotel owner won’t sell to an unconnected nobody. He proposes a marriage of convenience: he gets her good name and political clout, she gets the deed to the building that houses the shelter, and they get an annulment after he closes on the hotel.

If you were playing category romance trope Bingo, this book would win big. It’s a marriage of convenience crossed with and old money vs. new money conflict played out by a revenge-minded hero and a sheltered heroine looking to stretch her wings. All of this sounds busy, but the author does a great job of keeping the focus on the couple by making the plot illuminate who the characters are. The plot and the author’s writing fades into the background and lets the characters have the spotlight. At it’s core, this is a story about two people who appear to have it all finding the person who understands and completes them.

For all that this is a book about a man driven by revenge, one thing this book doesn’t have, thankfully, is an “alphahole.” Marcus and Pamela are on pretty equal footing and communicate with each other like adults. There’s lots of sexual tension, ego-driven posturing and bickering, but there’s no hate sex against a wall, there’s no angst over swearing off all females forever and there’s no effort to micromanage her affairs. A good example of a scene where this is made apparent comes after the heroine has a scary run-in with an angry man who comes to the shelter and threatens her with a gun.

“The women’s shelter is important to you.”
It wasn’t a question.
“It is,” she said. She’d known this conversation was coming.
She’d seen the worry and concern in his eyes at the hospital, had
heard it in his voice when he’d tried to forbid her from going back.
“Your safety is very important to me.”
…
“I can’t stop volunteering at the shelter, Marcus. Those women
need me.”
“I need you…to be safe,” he said.
“I will be.”
“That’s what you would have said this morning.”
“But I’m here. And I’m fine.”
He sighed and hugged her close. “I had to give it a shot.
Despite what happened today, I admire what you’re doing.”

Unlike most books where a character involves themselves in a cause, I thought the author handled it the right way in this book. Pamela treats her role there as work rather than a hobby. She processes donations, teaches classes and uses her connections to make sure the shelter continues to operate. None of the shelter’s residents are put on display to serve as a testament to Pamela’s magnanimity and graciousness. It’s about Pamela seeing a need and working to fill it. The end result is a character who’s a responsible citizen rather than a condescending do-gooder.

Where the book falters a bit for me is in the last few chapters. The sub-plot involving the hotel Marcus wants to buy takes a predictable and frustrating twist to set up the black moment between him and Pamela. Equally frustrating and predictable was the plot hole-riddled way it was resolved. That Marcus got both the girl and his revenge was kind of deflating. I wanted to see more character growth in the form of actual sacrifice to put Pamela above his need for revenge.

Final Assessment: A strong read in the spirit of a Harlequin Presents that doesn’t quite stick the landing. B/B-

2 Responses to “The Tycoon’s Socialite Bride by Tracey Livesay”