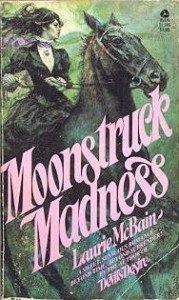 Laurie McBain is an author  often underrepresented in casual histories of the genre. Moonstruck Madness did massive business. I decided to revisit Moonstruck Madness because it was the book I remembered the least. MM is a glorious train wreck of domestic violence and kitchen sink plotting. No wonder I forgot most of it.

We open with Sabrina as a small tween on the battlefields of Culloden. Battle worn and weary, she’s fleeing for her life. (I didn’t pause to do the math, but I think she’s 11 or 12 here. Five years later her elder sister is 18 or 19, so let’s ballpark it there.)  Sabrina gathers the remaining members of her family and travels to her deadbeat dad’s abandoned estate. Of course she embarks on a life of crime to pay the bills and restore the estate to sustainability. This is a classic 70’s / 80’s thing. A couple teenage girls, a senile aunt, a servant or two with a very young heir suddenly occupy the family manor and no one ever asks where the money is coming from. Dad is off with the second family in Italy or Spain or wherever, but it’s all good.

Enter our hero – Lucien, the Duke of something or other. He’s got a controlling grandmother, murderous (and likely incestuous) cousins, a seriously bad attitude and Marry By This Date stamped on his inheritance. He starts out determined to capture the local highwayman, so he shoots Sabrina. In a modern Avon Romance this would form the majority of the plot. Back in the day, we were just getting started. Sabrina taking a bullet from this dude is like the meet cute. Sex happens (ow!) and she’s on her way. Over the course of the book Sabrina will be beaten with a whip, slapped across the face, survive multiple murder attempts (by multiple murderers) get married, be pregnant, have PTSD, and THEN start to fall for the Duke. (I left some stuff out, this review can’t go longer than my attention span.)  Ok, so after all that she and Lucien start to wonder if they like each other. They do, of course, so a bunch of other stuff happens and then they are in loooooove and the book ends. (Spoiler alert.)

Here’s the thing about 70’s / 80’s big books. For all that I absolutely despise the normality of abuse in the relationships I also really admire how Sabrina is a person with a unique backstory. Her strength and determination to overcome obstacles is not a bug to be addressed, but a feature. Some men admire her, some are fatigued by her, some want to change her, but the women all consider her a person to deal with rather than a problem to correct. She is occasionally self sabotaging and highly emotional, but she’s also a teenager. Most of the other women fall into super convenient categories. There’s a cheating fianceé whose murder no one cares about enough to even resolve, a crazy psychopath for whom disfigurement is punishment enough, an eccentric elderly grandmother who holds all the power, a psychic sister who longs for a conventional life, and the demented aunt who pivots the plot at the last second. Seriously classic stuff.

What turned me off about Moonstruck Madness (and still does) is the way violence between the hero and heroine is excused. Setting aside the fact that he shoots her early in the book, their relationship is incredibly toxic. He’s forcing her into situations she would rather escape. Her sister aids and abets him because of her visions and also because she seems to accept his actions as inevitable. Sabrina is a woman alone, struggling to save people who completely fail to appreciate or protect her. I found this one of the most believable aspects of Moonstruck Madness. When you are in a violent relationship people will not protect you. They will give you up without a second thought because your abuser has learned his lesson, he’s really in love, he’s never going to harm you now. This is both utterly untrue and a myth our culture refuses to abandon.

But back to Lucien. He’s not seen by himself or the book as abusive. There are other toxic men in Sabrina’s life largely given a pass while Lucien takes some of their blame along with his own. This sets the reader to be more sympathetic to him than his actions dictate. He’s deceptive (so is she!) and occasionally violent (so is she!) but the book couples his shouldering of undue blame with the both sides are guilty twist to absolve him. Even Sabrina, after all that has occurred, parrots the “He’d never hurt me” lines. By the standards of the genre at the time, he won’t. He’s decided he loves her and that makes it different.