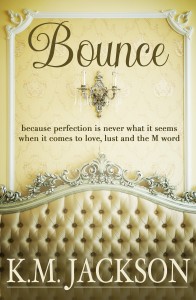 In keeping with my 2014 policy of reviewing more DNF’s, I’m going to talk about the first few chapters of K.M. Jackson’s Bounce. At it’s heart, Bounce is about a woman rediscovering herself. We meet Sabrina struggling to emotionally connect to her husband after learning of his infidelity. Sabrina’s pain and conflict is realistic. She is presented in a different way than a woman in her position usually is. Meeting the primary couple during resentful sex was a unique way to open the book. Hats off.

Bounce is written in the first person. First person is like being trapped at a party with a stranger you just met. If you like the person, it’s a wonderfully intimate evening. While Sabrina was talking I was trying to make eye contact with anyone else in the book. Because of the daring opening, we’re asked to approve as Sabrina tries to force herself into willing consent.  A few pages later we flash back to the night Sean revealed his affair. While I understood Sabrina better after that, I liked her less. Sabrina and I, we won’t be friends.

Sean has been failing her emotionally, then he reveals he was meeting up with a coworker. There’s no understanding of what led to this affair, or how long it lasted, or any of the details that would make his position a sympathetic one. Dude can’t keep it at home. Ok. Sabrina kicks him out. I’ve got her back. We’ll find out later why she let him come home and… Sabrina calls him home before he’s had time to find a place to sleep that night. She decides, with a complete lack of data, that her marriage is worth saving and they need to move forward. She shuts it all down and soldiers on. Look, I get that she’s operating from a place of fear and wishful thinking, but I’m not. While Sabrina wonders if the new nanny is too sexy to be around her man I wonder what the hell is wrong with this girl? Does she have a doormat kink?

We follow Sabrina to work, another refreshing change from the normal Lunch With The Girls post infidelity tradition. Here we find that she has a secretary who routinely fails her. Sabrina is stressed about the woman’s inability to perform simple tasks but gives her a pass because she’s too emotionally overwhelmed to do otherwise. By the end of the first few chapters it’s clear that Sabrina’s man is a cheater, her secretary is inept, her boss is a sexist racist, and her children are deeply disappointed in her as a parent. Sabrina immediately blames herself for everything. Hey, me too!

I get that Jackson is (probably) setting the stage for Sabrina to realize the problem isn’t her ass or her time management or any of the other things she’s stressing on. The problem with Sabrina is her inability to emotionally connect with her own desires and insist they be met. She’s fetishizing external approvals and needs above her own. She’s relying on a secretary to ensure promises to her children are kept instead of keeping them. She’s placing the concept of her marriage above her actual one. Sabrina probably gets her head straight over the course of Bounce and lays down some laws for everyone, herself included. I couldn’t stick around to find out. The more Sabrina focused on how inadequate she was the more I wanted to get away from her.

Bounce had strong word of mouth. With a broader point of view than Sabrina’s I might have really loved it. As it was I gave up after a month and moved it from the TBR to the DNF.

Final Assessment:  First person with infidelity but it’s the lack of backbone that drove me off. DNF. 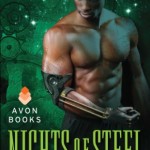 2 Responses to “Bounce by K.M. Jackson”