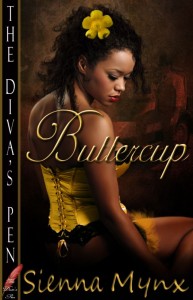 After reading Harmony by Sienna Mynx, an interracial romance between a black jazz singer and a white mobster in Jazz Age Harlem, I got a craving for romance set in the 20s and 30s. I bought an f/f by Colette Moody and this book, and Meoskop’s DNF review didn’t dent my enthusiasm one bit. Something about the setting’s lawlessness hooked me good, and I wanted more. Unfortunately, an awesome setting alone is not enough to make a good read, and Buttercup was not as enjoyable as Harmony had been.

The novella opens with a long “prologue” told from the POV of prison escapee and bank robber Silvio ‘Bloodshot’ Garelli visiting the carnival tent of a hooch dancer stage-named Buttercup. I put prologue in quotes because, although the author tags it as prologue, it seems to take place in the present. In it, Silvio watches Buttercup dance and strip before going backstage with her to have sex. Throughout all of this, he muses to himself about events from six years ago, when they shared a brief, but explosive night of passion before everything went wrong. Now broken out of prison and on the run from the police, he’s back to collect Buttercup and take her with him.

The prologue is actually a chapter-length dream sequence that Silvio wakes from at the start of chapter one and is the first in a few shifts in time frame. Instead of using flashbacks, Mynx splits the chapters between 1932 Kentucky and 1938 Indiana, essentially telling a story and its sequel at the same time. For this to work well in a novella, Mynx would have to keep the cast of characters small and constant to maintain a sense of continuity. Instead, Mynx has a rather large cast of secondary characters that change depending on the time frame. The short acquaintance with the side characters kept me from connecting with any of them. They were all disposable props, which made parts of the book that were meant to be suspenseful fall flat.

Additionally, Silvio and Buttercup aren’t as fleshed out as I would have liked. Yes, this is an erotic romance, but it is possible for a book to have too many sex scenes. When those scenes take the place of characterization and don’t teach the reader anything new about the couple or show how they’re compatible, there are too many sex scenes. Mynx showed me a young couple (18 and 20 in the 1932 part of the story) that couldn’t keep their hands off each other, and there’s something to be said for revisiting the sort of all-consuming passion that happens at that age, but I never felt like I knew who they were as people or as a couple.

Finally, there’s the writing. This book was earlier in the author’s career and I know she’s capable of better. In this book, however, the sex writing goes past awkward and into unintentionally hilarious.

With one final mating thrust, he gripped her buttocks tight and pumped until his seed exploded within what should have been her forbidden paradise. The universe was a flare of white-hot flames and heat radiated from her skin. She squeezed her eyes tightly shut as he held her through her very first climax. The friction of his pubes on her clitoris sent shockwaves of pleasure that mixed with the currents of desire sweeping through her system. Della pressed her face to his chest to stile her cries of pleasure. Then she shuddered through the last of the most intensely felt orgasm she’d ever known in her meager life.

No author should ever use “pubes” in a scene that’s meant to be sexy. “Pubes” is not a sexy word. This book also had weird dialog tags and non-verbal speech that was reminiscent of fan and stroke fiction. My favorite example was probably “‘Ugh,’ he grunted…” That was also in a sex scene, which, there’s just no need for that.

Final Assessment: It’s not the worst book I’ve read, but when the sex writing makes me snicker and the sex makes up half the book, I can’t recommend it. Not the author’s best work. D+

Awakening His Duchess by Katy Madison
Comments are closed.
Love in the Margins is a group romance blog trying to hit on the love stories that represent us all. We welcome discussion and criticism as we read through the stories of those whose lives don’t fit into the neat and tidy box labeled “default.”