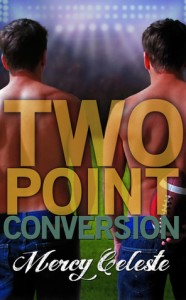 When I was fifteen I read Bret Easton Ellis’ American Psycho simply because I found out it had been banned somewhere in the world. I didn’t particularly enjoy the book but neither did I see anything in it that warranted the banning. So, you can guess what happened when I found out that Amazon had banned a gay erotica about identical twins.

Two Point Conversion is actually a quite good erotica; the sex scenes are arousing despite a few unfortunate word choices. Celeste dances around the age of consent issue by explaining that Kevin and Kyle had been held back from school a couple of years because of health reasons. This wasn’t an issue for me because the last time I checked, in Finland the age of consent is sixteen. Neither did the incest aspect especially heighten or hinder my enjoyment, although I’m pretty sure now that voyeurism is one my kinks. At least on the page.

The Beauchamp twins and a handful of secondary characters have proper characterisations, which is impressive considering the novella length of the story. The school bully, Heather, however does not. I won’t label the book misogynistic, though, because the absence of multilayered female characters in a m/m erotica isn’t wholly unexpected and because Celeste handles a tricky external conflict scene surprisingly well.

Majority of the sex scenes take place in the first half of the book, after which the plot takes over for a while and things get ridiculous. Of course the twins get caught and the only supportive people are gay. Or their mother. Because this is a well written incest fantasy I was able to suspend my disbelief and just go with it, mostly. As absurdly easy as the aftermath is for the boys, I was more bothered by the pseudo-science that explains Kyle’s and Kevin’s size difference compared to their dad. That and the throwaway comment about screaming like a girl.

Final Assessment: A never boring erotica that’s a worth a read if the themes don’t squick you. C

Source: Bought from All Romance ebooks.

One Response to “Two Point Conversion by Mercy Celeste”