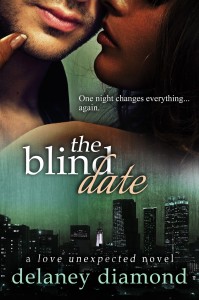 A few months ago I read The Wrong Man, which is the book after this one in the series, and really enjoyed it. The book was rough in some spots with jarring scene transitions and a rushed pace, but her voice was fresh and light and the romance was just plain fun. So when this book came off the KDP exclusivity and showed up at ARe, I tossed it in my cart. While I still loved the author’s voice, she makes some plot decisions at the end that didn’t sit well with me, making this book not as successful for me.

Fashion boutique owner Shawna Ferguson agreed to go on a blind date only to humor her sister. Focused on growing her business and comfortable in her life as a single woman, Shawna doesn’t share her happily married, stay at home mom sister’s drive to see her find a man and settle down. Intrigued by the mystery of a blind date, and promised a dinner at her favorite French restaurant in Atlanta, she heads out on her date to see who it is. When her date turns out to be Ryan Stewart, a furniture maker with whom she’d had a passionate fling six years ago in Chicago, she wants nothing to do with the man. He may want to reconnect with her and see if their attraction’s still white hot, but she’s never forgiven him for hooking up with her when he wasn’t exactly available.

The first half of the book alternates between their date in the present day and their weekend-long fling six years ago. I don’t generally like books that jump back and forth in time, but I thought it worked well in this instance. It starts off in the present before shifting to the past when Shawna and Ryan reminisce over dinner, effectively making the flashbacks part of the present action. Essentially you get a twofer: one throw caution to the wind New Adult romance mixed with one second chance romance between two adult business owners.

It’s funny that I decided to read this particular book on Sunday after having a long discussion on Twitter about cheaters and why I don’t like them as romance protagonists. I’d argue that Ryan’s not strictly a cheater, though. Yes, he hooks up with Shawna as a 24 year old while he has a girlfriend he doesn’t tell her about and she finds out about the girlfriend in a super awkward moment when Shawna runs into her at Ryan’s place. That said, Ryan’s in Chicago to visit his brother and put some space between himself and his girlfriend in Oklahoma. He’s working through some issues and considering making some big changes in his life. Cheating, to me, implies getting some action on the side while keeping up a false pretense with a partner to maintain a relationship the partner thinks is monogamous. Ryan, on the other hand, clearly doesn’t intend to keep two relationships going. He meets Shawna and gets swept up by his attraction to her, but he plans to end his previous relationship as soon as he can. He’s not a cheater so much as a procrastinator.

So, the first half to two-thirds worked really well for me. I liked how both of the characters are small business owners doing what they love on their own terms. They were well-matched personality-wise, with Shawna’s methodical approach complementing Ryan’s tendency to jump in and see what happens. Ryan’s previous relationship adds a wrench without making him into an unethical sack of shit. The sexual tension between them after their date as Shawna’s good sense wars with their undeniable chemistry is just delicious.

But, and you knew all of this was building towards a “but,” the book suddenly went downhill for me about two-thirds of the way in when a series of plot decisions hit me in rapid succession. To recap, the couple had a weekend fling six years ago then meet again in a blind date that ends in a hookup. This reads to me as a good start to a relationship. It does not read to me as an established relationship where Ryan should feel entitled to Shawna’s exclusive affection or time. Instead of continuing to woo her and getting to know the person she is now, he flies into a jealous rage when she won’t cancel her plans to attend a work party with a male neighbor.

“What, Shawna? I’m giving you what you want. Space. I’ve made it clear to you what I want. I want you. Now you need to decide if you want me, too.” He heaved a heavy sigh. “I know it’s scary and I know I come on really strong, but it’s been six years. Six years I’ve walked around like an empty shell. So you’ll have to accept that it’s really hard for me to slow down, and it’s even harder for me to stand by and let another man interfere with what we have.”

Everything about this emotionally manipulative tirade reminded me of that Shakesville post about the “I Love You” Defense. Yes, he’s jealous, yes, he’s intense, and yes, he’s making Shawna uncomfortable, but he just loves her *so much*, you see. He just can’t help himself. No. This is abuser logic.

This is followed up by Shawna attending the law firm party with her neighbor and, *surprise*, Ryan shows up to stake his claim and stare down his rival. If that wasn’t squicky enough, they then have makeup sex in a stall in the women’s bathroom. This is someone’s kink, I’m sure, but it’s an anti-kink for me. Nothing about it appealed to me, and I really didn’t understand why careful, safe Shawna was into it either. But it does set up the scene where the neighbor manhandles her and calls her a tramp and a slut and a whore for hooking up in a bathroom, which makes it possible for Ryan to beat him up, so it has that going for it. Toxic masculinity and violence is super romantic, you know.

Final Assessment: A great beginning spoiled by an ending full of problematic elements. I really enjoy the author’s voice, so I’ll keep trying her books, but this one didn’t work for me. C-/D+

Yours to Keep by Serena Bell
Comments are closed.
Love in the Margins is a group romance blog trying to hit on the love stories that represent us all. We welcome discussion and criticism as we read through the stories of those whose lives don’t fit into the neat and tidy box labeled “default.”