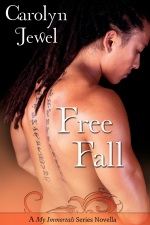 Pity the poor novella that is meant to hook readers into a series. It’s judged not only on it’s own merits, but also on it’s ability to reduce a complex world into an appetizing bite. One misstep on either side and the reader is ready to bury it. With that in mind, pour one out for Carolyn Jewel’s Free Fall. Having a vague impression of liking Carolyn Jewel I picked up Free Fall sometime in 2012. As I only read books that are piping fresh or carefully aged, it sat in the TBR waiting for the right moment. Free Fall packs plenty of story into a decent sized length. (Let me pause to say I appreciate how Jewel tells her readers up front how long the text is. You won’t end up buying a 20 page plot summary disguised as a short novel.) Here Be Spoilers, lassies!

We met Lys Fensic (the heroic characters tend to refer to each other primarily by their last names) in the lobby of her building, waiting for a friend to help her escape an abusive relationship. Her co-worker is trying to aid her but his assistance only increases her stress. At this point I was very interested in the paranormal world Jewel created. Fensic demonstrated some quasi-autistic characteristics that I wanted to explore. (Reluctance to make eye contact, sensory overload, aversion to unsolicited contact, struggle to use visual cues to translate emotional contexts). Then her friend shows up. My paranormal problems kicked into high gear and never settled down.

Khunbish is your basic predator hero. (He’s supposed to have a line over the u but I can’t locate the alt command for that so just go with it or correct me in the comments and I’ll add it.) Although he’s a computer specialist by trade, Fensic thinks of him as dangerously powerful because he’s tall and frequently calm. She builds up fantasies in her mind of him banging girls who wear glitter when he’s not beating up random men. Fensic has issues. But maybe not. Khunbish immediately refers to the coworker as “a pussy.” This is based on absolutely nothing. A perfectly nice man is trying to assist a coworker with her belongings. Khunbish instantly dismisses him with a slur of questionable taste. Nice. Let me go ahead and root for him right now. Or not. ANYWAY.

I’m briefly given hope that Jewel is going to call Fensic out on her vaguely fetishized reading of Khunbish’s character. When Fensic explains that she needs someone like Khunbish he does challenge her on her assumption that he’s physically adept and or violent based solely on his size and potentially his Mongolian ethnicity. Both of them hand wave it and move on. Of course Khunbish is violent! He’s a demon who could, if he so chose, utterly control her and… (Oh god, really?) There’s something about how witches are super sexy hot to demons (who are all male, as presented in this short) and they could enslave them but on the other hand mages (who are all men) can enslave the demons and that’s worse than actually dying because… I can’t even.

Fensic isn’t helpless in the ex-boyfriend showdown. (She’s equal in power to the other characters but set up as untutored and therefore exploitable.) They go to get something it turns out they don’t need and then it’s sexy time. I appreciated how Jewel set up the sexual interaction between the characters as freeing for both of them. Fensic has been held back by the domination of others and the fear of herself. Khunbish has been required to suppress aspects of himself to fit into the normalized human culture. (Vanilla is, of course, used as a dismissive descriptor. Because why not hit most all my peeves?) The concept that honesty enhances their sexuality is well presented and well conceived. Until it’s not. (This was my Free Fall reading experience, things were great, then really not great, then kind of great… oh no not great.)

Early in their encounter Fensic asks about condoms. Khunbish explains that demon / human sex is free from disease due to incompatibly. She says that’s cool and all, but she doesn’t use birth control. He says no problem because in his human form he’s sterile. He can only impregnate her if he’s in his demon form. Fensic wistfully reveals she’s always wanted a baby (because OF COURSE) and even in his demon form it wouldn’t matter because she’s unable to conceive. WAIT! FULL STOP! If she’s unable to conceive why is she asking about condoms in a birth control context? Talk about your mixed messages there, Cookie! Is this a passive aggressive conversation? “Well, I could get PREGNANT!” “No, babe, you can’t unless I change” “JOKE IS ON YOU! Even if you change I can’t get pregnant, HA!” Of course, she totally CAN get pregnant because his magic demon sperm knows no human infertility. So let’s make this hybrid baby and get back to the guys trying to kill us.

Fight scene, drama, ex boyfriend, discover your true powers, blah blah blah. Now we’re wrapping things up with another bait and switch moment. Khunbish has been forced to call in the local warlords, who are apparently the main couple of the book series. At the close of the fight, the female half of the partnership asks if they’re ok with meeting the male half and they agree. Suddenly it’s baby-louge time and they’re meeting with the male half several weeks after the female half asked if it was cool to do it now. Fine, ok, something changed, we can go with that. We head over to the mansion where the various demon underlings are hanging out and they’re doing fist bumps and hand jives and trash talking and we discover some are Indian, some are not described and here’s the big dude and…. oh hell to the no.

The big dude is a sandy haired boy next door type who is deceptively un-powerful in his physical presentation. My paranormal problems are having a five alarm fire in my head as he lays down the law for Fensic and Khunbish. Mr. Big Dude condescendingly tells Khunbish to “use his words” (no kidding) to figure out his relationship with Fensic because they can’t be together unless both of them swear loyalty (or not) to Mr. Big Dude’s gang. If they swear loyalty there is money and safety in it for them as long as they comply with whatever Mr. Big Dude desires. If they don’t then they are “a problem” for him and might end up getting killed or something. Furthermore, while their fealty is of their own free will, once sworn any failure of loyalty could result in their death. Khunbish is fine with this because apparently demons are totally used to being in gangs. They kind of like it. He’s been a free agent for so long because… some kind of reason… but he knew it probably couldn’t last with all the turf wars heating up. Fensic agrees because love and pregnant and all, and because she isn’t sure how to control herself without Mr. Big Dude’s group teaching her. Mr. Big Dude welcomes them and the baby into his gang. And. The. Baby. AND THE BABY. Wow.

Your experience with Free Fall will depend completely on if we have the same paranomal problems. If I’d been able to set aside my aversion to ethnic based personality traits and alpha hole heroes pretending to be beta and street gang culture as paranormal normality, I’d probably have given Free Fall a pretty high rating. Because I wasn’t I ended up with a C read. I still like Jewel, but I think I’ll stick to her historical stories instead.

Final Assessment: There’s a lot happening in this novella but it hit some personal peeves. C.

Series: Set in the My Immortals world but easily read on it’s own. 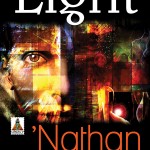