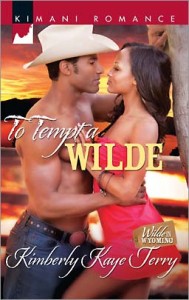 After two years on the run, Althea Hudson may have finally found her safe haven. Who’d have thought it would be in Wyoming, at a sprawling ranch owned by three rugged alpha males? But it’s strapping Nathan Wilde who’s making her heart beat faster… even if the sensual cowboy has made it clear he’s not in the market for romance. Althea’s genteel manner and sweet charm don’t fool Nathan for a minute.

Stung by his ex-fiancee’s betrayal, the relationship-wary rancher isn’t prepared for the overwhelming desire his newest hired hand arouses. But the stunning belle is hiding something…and she may be too proud to ask for his help. If Althea only trusted Nathan with her secret, could they transform the heartbreak of the past into a passionate love for the future?

Just a warning, this review is about to get a wee emotional, so just bare with me while I ramble on incoherently.

I read this because I originally wanted to read To Love Wilde (book #2), which I came across on tumblr. I love ranch romances ‘cause barn sex and cowboys. This was hard to turn down. I hate reading series installments out of order even if the couples are different so I picked up To Tempt A Wilde first. I have to say that story telling is a wee funky in that almost each chapter and several section breaks jump ahead in time, sometimes two weeks. From that point you’re in Nate or Althea’s head getting a flashback of what has happened in that time. It’s a little strange and I found that it did take away from the story because I think a lot of conversations and moments that should have been shown and not told were breezed over.

The story picks up with Althea’s stalker watching through the window of her rented hotel-apartment. I liked this set up. Not because I liked stalkers, but because I knew Althea’s inevitable flight from Nate would be about this stalker and not just a conversation gone-wrong/not had. So, set-up? Good. Althea is hard working and with it. She doesn’t take herself too seriously, but she also knows her worth. GREAT.

After meeting two of the three Wilde brothers in her diner, and realizing the stalker may be closing in on her location, she takes the Wildes up on their offer to come make a few bucks working on their ranch. Ranch life agrees with Althea. Her father raised her around horses and she is actually a fan of sweaty work.

So our heroine is off to a likeable, interesting start.

AND THEN WE HAVE NATE FUCKING WILDE!

Nate is a dick. I don’t know any other way to say it. He’s not an alpha male who has come sort of complex. He’s just a dick. He’s also a dick who don’t want no women working on his ranch. Except the woman, Lilly, who is older and has raised him and his brothers and does all their cooking. She’s cool. But other women? Nope. No way. No how. No women on the Wilde ranch. Why? Because Nate was engaged once to a woman who left because ranch life wasn’t for her, or so the note she left says. I’m guessing she left because Nate is huge dick and she was tired of hanging out with a huge dick. Althea stays of course, because every single person on the ranch can see that she’s pulling her weight and makes sure Nate knows it. He can’t exactly fire an ideal employee.

Spoiler alert, Nate is pretty much a dick all the way to the end. Even though he does fall for Althea, there’s no courtship and even though the reader knows they both want to jump each other’s bones, This is shown mostly through internal monologues. Nate’s drove me nuts. In his head his feelings for Althea are happening to him, as if he has no control over himself. His lust rules him. Althea will be the death of him just because she’s beautiful and on and on. I just wanted to slap Nate. And then there are the parts where he talks about her likes she’s wild horse that he’ll tame.

The first 63 pages, though they are lusting after each other, in secret of course, they barely say a word to each other, beyond Nate telling her he doesn’t like women working on his ranch. Everything he actually says to Althea in the first portion of the book is mean.

And then he grabs her and kisses her. And Althea is all for it.

The rest of the book, Nate continues on with his dickiness, that morph’s only slightly as he soon realizes he does want Althea around and that he loves her. Still his language toward her and his brash actions are the same. A lot of taming, a lot of grabbing, a lot making, and staking claims. I didn’t like it, but you know what? I liked this book. I liked it a lot. The sex scenes were very well written. The appreciation of Nate’s body from Althea’s point of view was nice, as well. She did her fair share of oogling. Althea and the supporting characters were great. The truth about Althea’s life before she went on the run and how Nate, a black guy, ended up on a ranch with a white brother and a Native American brother, was well done, too. You get to witness the birth of a baby cow. Awwww. And in the end Althea really becomes the hero of her own story. There’s still that stalker to be dealt with, ya see.

I liked a lot of things about this book. I did not like Nate Wilde. I will probably read the rest of the series ’cause barn sex and I want to know what happens with Nate’s brothers.

2 Responses to “To Tempt a Wilde by Kimberly Kaye Terry”