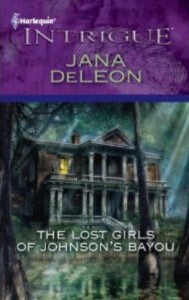 Archeologists date The Lost Girls of Johnson’s Bayou to 2012 in my TBR stack. I was going on about missing gothic romance and a friend sent me a couple Harlequin Intrigue titles to try. DeLeon was an interesting author. Her mechanics are off but the finished product reads smoothly. I’d suggest this one for the night you just can’t settle down but still want to read. The Lost Girls of Johnson’s Bayou is an undemanding read. There is an air of the older gothic with definitely modern touches.  It’s soap-tastic in it’s you’ve-got-to-be-kidding-me plot details.

Ginny walked out of the woods sixteen years ago with no memory of who she is or how the school in the center of the Bayou burned down, killing the students inside. Paul is a former cop who has switched to private investigation. He has a personal interest (of course) in the mystery that Ginny has largely put behind her. Paul is woefully undeveloped by DeLeon. I knew roughly who he was but he never became more than a sketched in concept of a lead. For the purposes of the story we don’t really need more, yet filling in some of those empty areas would have made for a much richer experience. Of course Ginny and Paul team up to work the puzzle, endangering themselves and those important to them in the process.

The Lost Girls of Johnson’s Bayou is a solidly working class story. Ginny has a job and a side hustle. She and her mother work hard and count costs. Paul has a partner but no special connections or heavily financed back up. The actions they take are believable. When Paul asks Ginny out to dinner in The Big City she reminds him she has an early shift so they stay close to home. Their response to danger is reasonable as well – no one goes on the run, gets whisked to a safe house, or calls in the FBI. While the emotional punch of one plot resolution is pulled by the speed (and sheer chance) of it’s resolution, not every question is answered. I appreciated the author’s willingness to let a few loose ends lie.

DeLeon brings in some elements I was concerned would overwhelm the mystery (or be a face palm of a resolution) before setting them aside in favor of a more original explanation for the events in Ginny and Paul’s past. The red herrings are appropriately explained with enough foreshadowing for the reader to find the revelations at the end satisfying. While there is a baby in the epilogue it isn’t Ginny or Paul’s. Overall, a decent read and an author I’ll try a second book by.

Spoiler Alert: The Reddest Herring View Spoiler »The questionable element is a nod to the obsession with satanic cults and child abuse that ran rampant a few decades back. I thought DeLeon was going there, but fortunately she only side swiped it.  « Hide Spoiler

Final Assessment: They would have gotten away with it if not for those meddling kids. B

Talk Sweetly To Me by Courtney Milan
Comments are closed.
Love in the Margins is a group romance blog trying to hit on the love stories that represent us all. We welcome discussion and criticism as we read through the stories of those whose lives don’t fit into the neat and tidy box labeled “default.”