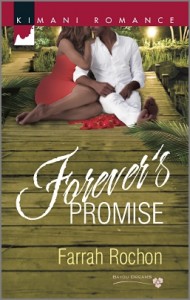 Forever’s Promise is the fourth book in Rochon’s Bayou Dreams series, set in small town Louisiana. I can’t really judge, but the setting felt authentic, not surprisingly since Rochon is a native of Louisiana. I’m familiar, in personal terms, and fearful, in fictional terms, of small towns, but, as Meoskop put it in a review of Yours Forever, the third book in the series, Gauthier is “a small town I didn’t automatically hate.” It’s in a period of renewal and recovery after years of decline. While everyone knows everyone, and gossip is ever present, it doesn’t get in the way of the story.

Shayla, a thirty-six year old single workaholic, returned to Gauthier eight months ago in order to help her sister-in-law raise her two young nieces after her brother’s tragic death. Having spent two decades building a big career working for a Seattle coffee outfit, she decided to open a coffeehouse and cafe, The Jazzy Bean. Shayla goes a little overboard on her The coffee house is doing well, but Shayla is having a harder time bonding with her nieces and sister-in-law. She has a lot of guilt for her two decades of distance, a period during which her brother reached out to her many times but got only her assistant or her voicemail on the line.

Xavier is an ER doc in a town twenty minutes away. Gorgeous and single, he’s a locum, only there on a three month contract. Xavier hails from a family of physicians and was raised in upscale Buckhead, Atlanta, but class is not an issue in this book. Xavier’s issue felt a little more contrived: he was dumped by his dream fiancee when she discovered he was going to be a lowly ER doc. She went on to marry a cardiothoracic surgeon, but instead of using his overabundance of intelligence and good sense to chalk it up to a bullet dodged, he swore off commitment of any kind, and has been an itinerant doctor for over a year.

Shayla has heard the scuttlebut about the handsome new doc in town, but she has zero interest in dating, and they don’t meet until her niece downs some Easter egg dye and has to be treated. Xavier has been hit on at work so many times by women trumping up false symptoms (yeah, I know) that he accuses Shayla of poisoning her own niece to get a chance to meet him. This book would have been a wallbanger for me if that wasn’t handled as swiftly and as well as it was. Shayla gave him several beautiful takedowns, and he spent the next several chapters apologizing in increasing sweet and irresistible ways. Here’s Shayla’s attitude one day after:

She followed Malinda into the break room and came face-to-face with the E.R. doctor from last night.
“Oh, great.” Shayla snorted. She moved past him, setting the coffee and pastries on the square card table in the middle of the room. Then she turned around and addressed him. “Before that huge head of yours gets any bigger, know that I had no idea you would be here. This isn’t some ploy to put me in your illustrious presence once again.”
“I’m sorry about—”
She put both hands up. “I’m not interested in your apology.”
“Is there a problem?” Malinda asked, looking back and forth between them.
“Oh, I just don’t want God’s gift to women over here thinking I’m going to attack him in a fit of passion.” He crossed his arms over his chest and slanted her a sardonic look. It goaded her that the egotistical bastard had the nerve to have such gorgeous eyes— eyes that were currently roaming over her with enough cynicism to choke a small animal.
“You done being self-righteous?” he asked.
“Not sure yet. Are you done accusing me of trying to commit child murder?”

When Shayla says she is not interested in men right now, she’s not lying to herself like in so many romance novels. Her main concerns are her family and her business. So Xavier is the pursuer, and if you like a straight up hero who refuses to play games, this is your man. I really appreciated the relative lack of intrusive lustful thoughts and the pages spent just on Shalya and her family and business. Xavier has less of an arc, but he, too, is a well rounded person, not just a walking erection.

That said, there was a lot of good sexual tension built up for the first half of the book, which ended in the quickest sex scene I have ever read in a romance novel. I checked to see if I had pages missing. This is a couple who have barely kissed, and they go from the front door to intercourse in six sentences. The passage did, however, introduce me to a much appreciated variation on the tired phrase “come for me”: “Reach for it.”

I enjoyed Forever’s Promise, as a low-conflict romance between two very good people who have made some errors in judgment in the past and need to work through, rather than hide from, the consequences. I had not read the prior books in the series and didn’t feel I was missing anything. Sometimes the hero and heroine are a bit too noble, as when Shayla decides not to serve unhealthy food to customers with high blood pressure or diabetes even when they ask for it. I have to admit, I personally enjoyed the couple’s shared concern for public health, but some readers might find Shayla’s zeal a little intrusive. B