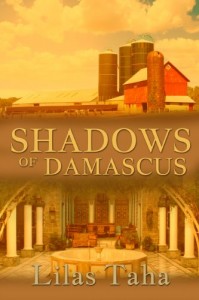 Today we have a guest review from Anu K. You can find her on Twitter. Enjoy!

Bullet wounds, torture and oppression aren’t the only things that keep a man—or a woman—from being whole.

Debt. Honor. Pain. Solitude. These are things wounded war veteran Adam Wegener knows all about. Love—now, that he is not good at. Not when love equals a closed fist, burns, and suicide attempts. But Adam is one who keeps his word. He owes the man who saved his life in Iraq. And he doesn’t question the measure of the debt, even when it is in the form of an emotionally distant, beautiful woman.

Yasmeen agreed to become the wife of an American veteran so she could flee persecution in war-torn Syria. She counted on being in the United States for a short stay until she could return home. There was one thing she did not count on: wanting more.

Is it too late for Adam and Yasmeen?

I’m a sucker for marriage-of-convenience plots, and when I saw Shadows of Damascus at Romance Novels in Color, I had to give it a shot.

Shadows is about two ordinary people coping with trauma and grappling with uncertain circumstances. Adam struggles with severe PTSD, both as a veteran of the second Iraq War and from his abusive childhood. Yasmeen’s trauma is ongoing. She experienced the horrors of the Syrian Civil War up close and now worries about her family and friends from afar. Author Lilas Taha avoids the larger politics of the wars, instead focusing on how these two individuals deal with their circumstances.

Adam is a 28-year-old organic dairy farmer in Wisconsin. Since he left the military in 2006, he’s lived a near monastic life, rising early to milk his cows and working all day to manage his farm. He reads and spends time with his best friend, Jonathan, and Jonathan’s fiance Amy, but that’s it. Adam is determined to prove (to himself, mostly) that he is the steady, responsible owner of the family farm that his abusive father wasn’t. There’s a sternness to Adam, and a need for order and precision, that helps him cope with the deep psychological damage he’s endured. And he’s sometimes needlessly cruel, in thought and action. I love Adam, but he needs serious therapy.

Yasmeen is indeed emotionally reserved, both from Adam and the reader. She’s a sheltered 21-year-old whose brother helped her escape from a Turkish refugee camp and sent her to Adam for safety. Yasmeen spends most of the book simply existing in Adam’s home, the recipient of his unwavering patience and generosity. Her behavior gets pretty grating after a while.

But it’s also understandable. Yasmeen is in limbo — emotionally and geographically — waiting to return to her real life with her family in Damascus. She doesn’t have the headspace to consider Adam in a romantic light until the end of the book. She’s somewhat of a cipher and occasionally veers into bratty behavior. But, overall, I found Yasmeen to be direct, resilient, and intelligent. She reveals her warmth over the course of the story.

The romance itself evolves gradually, particularly on Yasmeen’s part. I enjoyed getting to know Adam and Yasmeen as they got to know each other. Their interactions were by turns frustrating, funny, poignant, and affectionate. There’s no sex in SOD. There’s attraction and some G-rated mental lusting on Adam’s part, but nothing else. I found this refreshing both because it’s consistent with Yasmeen’s character, and because of reasons that Liz articulates so well.

But ultimately, I wasn’t convinced by Adam and Yasmeen’s romance. First, it’s unbalanced for most of the story. Adam’s initial protective feelings for Yasmeen quickly morph into something stronger. He bends over backwards for her, ignoring his own physical and emotional pain for her wellbeing. He does this for a woman he hardly knows and who gives him little encouragement for much of the book. Why? Adam seems to need to be needed, partly as relief from his solitary existence and partly, I think, rooted in his protector role to his abused mother.

I also wondered about Yasmeen’s feelings. For nearly three months, she lives in near isolation with a man on whom she’s completely dependent. Does she feel love or co-dependence? Are the choices she makes borne out of genuine desire or a need for stability in her very unstable circumstances? Could she really be satisfied with life in a rural town when she’s used to the bustle of city life filled with family and friends? She’s had no contact with the Syrian community in the US; how would she view her options if she’d had the chance to do so?

Second, the plot choices in the final third of the book weakened the story. Adam’s abusive father comes back into his life, causing Adam much turmoil. But this thread goes nowhere and tells us nothing we didn’t already know. Meanwhile, Yasmeen has crucial phone conversations with her brother and mother that receive only cursory attention. Those calls determine Yasmeen’s (and therefore, Adam’s) future but are given short-shrift. These choices detracted from the drama of Yasmeen’s story in particular and Adam and Yasmeen’s romance in general.

Still, the final scenes show how promising these two are as a couple. I just need a more fleshed out picture of how and why they would work. I would love to see them work through the next phase — I would say the *real* romance phase — of their relationship. Because, despite the flaws, I’m definitely invested in Adam and Yasmeen’s story.

Final assessment: Compelling characters and story but too many unanswered questions make this a B-/C+ read. Typos and grammatical errors drop the grade another half notch to a final C+/C.

NOTE: SOD contains a couple of descriptions of torture practiced by the Syrian government. These descriptions were of events that occurred in the past and recounted in the story’s present.

3 Responses to “Shadows of Damascus by Lilas Taha”