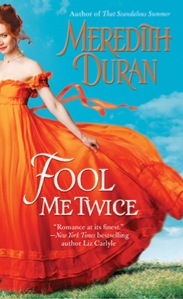 Fool Me Twice is a fairly classic Beauty and the Beast tale with few real surprises. As a character piece, it’s absolutely lovely. When the sex kicked in I was sorry to leave the action for the, um, action. In my review of Duran’s That Scandalous Summer I expressed a wish that Duran would write a book dealing more completely with mental illness. Apparently, that was her plan. Fool Me Twice delivered on that front beyond my expectations. Picking up the tale of The Unhinged Duke, Duran spends much of the book inside Marwick’s mind. His inner life is beautifully expressed. While some may find his eventual emergence from depression a bit neat I found it accurate and compelling.

Olivia I had slightly less patience for. I have had my fill of self sacrificing heroines. In her initial presentation Olivia is an extremely capable woman running from a life threatening situation. She needs access to Marwick’s archives to free herself. Let me pause here for a minute. It amazes me how difficult heroines find it to escape their past. People did it every day. Every family historian knows the flexibility of identity. While I believed a motivated stalker could relentlessly pursue Olivia, I had difficulty thinking the person who was after her would be so hard to elude. Let’s accept that he is and move on. Olivia enters into Marwick’s employ and is forced to tame the beast. Everything about their interaction was lovely. Olivia and Marwick worked as a couple and as a plot device. I wanted to read about them forever. It couldn’t last.

When Olivia is reunited with her birth family, everything goes in the hand basket. Marwick’s overture to his estranged brother felt genuine. Olivia’s family interactions felt forced and unnatural. While she herself frequently points out Marwick’s snobbery, her own stands unchallenged. Olivia allegedly has everything she ever wanted standing in front of her. She rejects it because it’s unfamiliar. This is her choice to make, but it moves the book into a Heroine In Peril and Questionable Moral Choices ending. Let’s wrap things up under a spoiler tag.

In Which I Break Up With Olivia Forever.
Olivia decides to forgive the person who has sought (repeatedly) to murder her because the person “loves their children”. She decides it is better to force the children from their homes than reveal that they are being raised by amoral criminals who consider human life disposable. Falling upon the time honored solution of Not In My Backyard, Olivia requires only that they stop trying to kill her and that they leave for another country. They are forgiven because they were simply trying to protect their financial and social status. Bitch, please. Get those kids away from crazy town. How do you know they will never be seen as a threat to their parents? Or their friends? Or their spouses? Or a business rival? You have ample proof these people are vile, ruthless sociopaths and you think the proper resolution is to make them hungrier for lost status? That’s for the good of the kids? What about the nation you just sent them to? Do they get a vote? Olivia, that’s not self sacrifice, that’s toxic as hell.

Series: Book 2 of Rules For The Reckless

5 Responses to “Fool Me Twice by Meredith Duran”