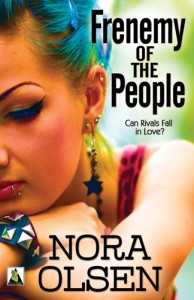 Clarissa and Lexie couldn’t be more different. Clarissa is a chirpy, optimistic do-gooder and a top rider on the school’s equestrian team. Lexie is an angry, punk rock activist and the only out lesbian at their school.

When Clarissa declares she’s bi and starts a Gay-Straight Alliance, she unwittingly presses all of Lexie’s buttons, so Lexie makes it her job to cut Clarissa down to size. But Lexie goes too far and finds herself an unwitting participant in Clarissa’s latest crusade. Both are surprised to find their mutual loathing turning to love.

A change in her family’s fortunes begins to unravel Clarissa’s seemingly perfect life, and the girls’ fledgling love is put to the test. Clarissa and Lexie each have what the other needs to save their relationship and the people they love from forces that could tear them all apart.

I’ve been wary of reading a lot of YA in general lately since the whole Twilight rebranding swept through Barnes and Noble and made it virtually impossible to tell a lot of YA books apart. The blurb for Frenemy of the People caught my eye though and I decided it to give it a whirl. Full disclosure, Olsen and I are “label mates”, but we’ve only spoken once or twice via Facebook.

My feelings about this book, they are so mixed, but in a very particular way. The story starts off with Clarissa’s POV. I immediately liked Clarissa, mostly because when I was her age, I too had issues with being verbally blunt and not knowing when to shut the fuck up. Clarissa is very honest and open, and very human. I enjoyed being inside her head, and hearing her thoughts on her family, her extracurriculars including her horse, and her group of mean girl friends who she quickly realizes aren’t really that great. Lexie, an intentional loner and their school’s only out lesbian, is equally forward, and funny, but her outlook and attitude are lot more bleak.

What worked for this story was most was the characters. Lexie and Clarissa came from two different families and even though both sets of parents were aloof in their our ways, Olsen does a great job of showing exactly where the apple falls when it’s flung from a certain tree.

Another bright spot was Clarissa’s sister Desiree, or Des. Des has down syndrome, but from the moment we meet her, her character isn’t presented as charity case or some roadblock to Clarissa’s true happiness. Clarissa treats Des like any teenager would treat their sibling and on the flip side, Desi treats Clarissa the same way. Desi gets annoyed with Clarissa’s antics. They conspire together against their parents like any sibling pair should at least once in their life. They butt into each other’s love lives (Desi has a boyfriend), and they are fiercely protective of each other. I didn’t feel like their relationship was one sided, or like Clarissa treated Desi like a child. Desi was a full participant in the story and I found myself liking her a lot.

The love story, though central with a happy ending, takes back to seat to other issues swirling around the girls. Clarissa comes to her bisexual realization a little quickly for me. Not that I think one should struggle with their sexuality, but it dawns on Clarissa that she is bi and that she is going to come out to everyone, consequences be damned, in maybe thirty-three seconds flat. Clarissa is such an open person, I didn’t have too much trouble buying this, but I could have gone for at least a few more paragraphs of some kind of hesitation. Lexi does have trouble buying it at first and against her own judgement, findings herself falling for Clarissa and all her open goodness.

MEANWHILE! Desi wants to run for homecoming queen. A mutual friend of their runs into a bit of trouble and big trouble of a different kind finds Clarissa’s family. Clarissa is able to rely on Lexi heavily throughout all of this and Lexi proves herself to be an amazing girlfriend. Anywho, there’s a lot going on in this book. You’ll learn a lot about the mortgage crisis too, if you’re not up on the details of how you can be underwater on a mortgage.

What didn’t work for me, the particular thing, was Lexi’s actions and the non-consequences of her actions. Through all of her noble punk rockness, Lexi actually commits quite a bit of ethically justified property damage. Stunts like this are known to be committed by teens and adults alike so I won’t fault Lexi for that. What kept grinding my gears was that Lexi’s whiteness, and to a lesser extent her class, make it possible for her to get away with some of this stuff.

No spoilers, but in one scene, if Lexi or her parents had been brown or black, I kept picturing a particular confrontation turning into a literal homicide of Lexi’s father by a cop and Lexi most certainly being arrested and tried as an adult. What’s tricky about this is that Lexi’s privilege allows her to be helpful to Clarissa (while being equally destructive in other ways.) So, though I found myself trying to enjoy the story, Lexi’s whiteness and the way she wielded it kept bringing me up short. It was a blessing and a curse. Olsen nails the reality of Lexi’s life. She would get away with this stuff, but that realness just reminded me how much that privileges pisses me off.  Kudos to Olsen for sending me into a ranty-rage. Right?

Overall this is a very well written, humorous story. I wouldn’t recommend it for the love story if you’re looking to be engrossed in romance, but if you want to read something fun and learn a little bit about getting the dark side of mortgage lending (I swear to god, actually learned a ton as someone who is not a homeowner), definitely pic it up.

One Response to “Frenemy of the People by Nora Olsen”