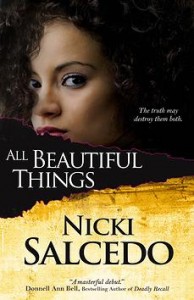 All Beautiful Things is a DNF review, however the problem was not the quality of the book. Salcedo’s writing was too vivid, her world too immediate for me to continue. I like my angst well seasoned with lightness. All Beautiful Things is a dark read without much to break it up. The first half of the book is about pain and recovery. I skipped ahead before writing this review to ensure that there is a HEA or a HFN because if you’re able to take the trip I think Salcedo is worth your time.

Seven years ago Ava Camden was viciously attacked in a random piece of street violence. She was left shaken and scarred, her world turned upside down by the unpredictable brutality. Her attacker, Joel Sapphire, saw his nascent NFL career ended by his conviction. His brother, Graham Sapphire, believes the wrong man was convicted. All Beautiful Things opens as Joel is released on parole.

Ava spends her afternoons working in a homeless shelter. Her nights are spent wandering the streets of Atlanta looking for murder and crime scenes to photograph. There’s a police officer, Brad, who seems to work every scene she arrives on. Graham is your conventional romance hero. He rose from poverty to become the sort of multi millionaire who can stalk a woman for seven years (Ava has refused all contact with the Sapphire family), offer her a million dollar shelter donation, withstand her prominent family’s attacks on his business, spearhead an investigation into his brother’s innocence, and still find time to take care of his cancer stricken mother. There’s a lot going on with him. He alternates between accuser and victim, all in a low key manner.

“We all have scars, Ava. Just because mine are hidden doesn’t make them any less painful. Whenever someone looks at me, I feel their eyes on my skin where bruises used to be. I would never have approached you if I thought my brother could have done this to you. Never. He couldn’t. He would never. He saw what our father did to me and our mom. I understand why you like to hide. My attacker was a man who was supposed to have loved me. But I understand if you want to make me pay. If you need to use your knife on me, I’m not afraid.” Salcedo, Nicki (2014-01-02). All Beautiful Things (p. 93). Bell Bridge Books. Kindle Edition.

My Issues With Graham.
Graham has written her countless Nice Guy letters. He offered her a million dollar bribe (which she declined to accept) so he starts showing up at her place of work and her family’s charity party under an assumed name. Super not cool. When one appearance leads to a panic attack merging with an allergy attack, it’s Graham that rushes Ava to the hospital despite her entire family being nearby. They have no concern for Ava disappearing shortly after Graham appeared. (If Ava was my sister I’d have been calling the city looking for her and checking the GPS on her phone.) Ava decides to find Graham comforting and keeps him by her side in the hospital.

Ava and Graham both need a lot of therapy before I’d want to spend more time with them. This isn’t a story about two people with a painful event in their past, it’s a story about two people trapped in a painful present. Salcedo beautifully evokes depression and mental illness. She also serves up a healthy side of fetishization. My praise for All The Beautiful Things comes from Salcedo being able to trigger emotions other than simple impatience with their willful self destruction. It’s not going to make me finish the book. If you like your main couple dark, damaged and struggling to cope you will likely enjoy All The Beautiful Things quite a bit.

Final Assessment: So many people on the cross, they ran out of wood. DNF

4 Responses to “All Beautiful Things by Nicki Salcedo”