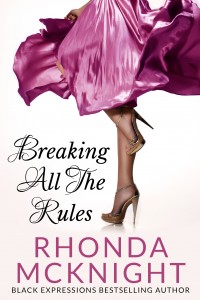 This was a DNF by the end of the sample. I’m going to lay out my objections with the caveat that the premise itself was pretty much a deal breaker for me. Breaking all The Rules pushed a ton of Nope buttons from the first page forward. Rhonda McKnight writes in the first person. I’m finding this far more common in black romance than I’m used to. It’s something I personally dislike, as it demands I live inside the narrating character instead of having the freedom to choose my own focus.

Deniece is a wedding planner who has failed to escape from an extremely toxic family. What she narrates as her sister’s spoiled point of view reads to me as impossibly self involved. The book opens as her sister lands a number of body blows in rapid succession. She is marrying Deniece’s former lover. She is six months pregnant. She expects Deniece to take an immediate leave from her job and plan this wedding. She dreams of a lavish ceremony despite being broke and frequently depending on money from Deniece to make ends meet. Oh. Hell. No.

“I know you’re surprised and all, because who would have thought I’d be interested in your leftovers, but it’s a long story how we got to know each other and although I feel kind of bad that he’s kinda ex-ish for you, I can’t help but be happy because I’ve found the man I want to spend the rest of my life with.”

The rest of the sample is dedicated to Deneice’s feelings of inadequacy as she struggles to put all of her emotions aside. I didn’t understand how anyone, even the most self deprecating person, would climb on this cross. Not only had her sister failed to inform her of her involvement with Deniece’s ex, she had done so long enough to be weeks away from delivering his child. There’s low self esteem and then there’s pathological self harm. Deniece definitely belongs in the latter category. According to the final pages of the sample Deniece will get her mojo back with a younger man who calls her Nectar. I wished her luck and gave up.

Play With Me by Alisha Rai
Comments are closed.
Love in the Margins is a group romance blog trying to hit on the love stories that represent us all. We welcome discussion and criticism as we read through the stories of those whose lives don’t fit into the neat and tidy box labeled “default.”