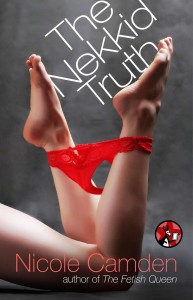 I picked up this novella, which originally appeared in the anthology Big Guns Out of Uniform, shortly after I read an A- review for it at Dear Author. I generally avoid erotic romance and romantic suspense, but it was free and had a disabled heroine, so I added it to my stack of unread ebooks. While I didn’t expect to love the book (saying DA’s Jane and I don’t see things the same way is a monumental understatement) that it was an example of everything I hate about the romance genre really surprised me. This book was bad in a way that makes me want to take an extended hiatus from reading romance.

Five years before the story begins, photographer Debbie Valley was hit by a car driven by the partner of San Diego policeman Detective Marshall Scott. The resulting head injury left her with prosopagnosia, an inability to recognize faces, and Scott finds her a job as a crime scene photographer to assuage his guilt over the accident. For five years, Debbie and Marshall have circled each other, despite their mutual attraction being obvious to everyone who knows them, until an outburst at a wedding and a murder case leads them to finally act on their desire.

Pretty much the only thing I liked about this book was the sexually experienced heroine. She likes men and she likes sex and it’s not pathologized. She’s not hooking up because she was abused as a child, or because she wants to feel alive/loved post injury. She has no-strings sex because she wants to and that’s that. She has an artistic interest in nude bodies, and an art photography career built around it, but is still unabashedly sexual. Unapologetic female desire is a rare thing in romance.

Unfortunately, everything else about this book pretty much sucked.

It’s in first person, which I’m not a big fan of in romance, especially if it’s told as if it’s just a third-person story with a single POV. It falls into “white default” and only mentions race once, when a gay black man gives Debbie relationship advice. Everyone else was white, I guess. She uses dialect twice; once when the black police employee spoke and once when an Italian woman played the role of Magical Ethnic Grandma and offered sage advice about her troubled soul by reading her face or some shit. IDEK. For true romance cliche Bingo, it also contains the line “He smelled of soap and man.”

What really got to me, though, was the portrayal of Debbie’s disability and how Marshall spoke and behaved like a typical abuser. Debbie’s prosopagnosia was always mentioned in terms of what it had taken from her and how it made her feel less than. Some examples of this:

Since I’d gotten hurt, I doubted, often, whether I was capable of loving anyone anymore. How could I? I wouldn’t recognize Mel Gibson if he walked through the door, much less someone I loved.

I looked at him as he rinsed out my hair, silently asking him why now? Why me? I studied him, trying to make his features come together in my mind as something I recognized. It was no use: I was broken. The switch that allowed all humans to differentiate one face from another just wouldn’t flip inside me, not for friends, family, or lovers. I often doubted that anyone could really love someone who couldn’t recognize their face, or if, indeed, I was even capable of loving anymore.

I wanted to shout that of course I’d be faithful, but something stopped me. I wasn’t sure he really understood what it meant that I couldn’t recognize him. Would he get tired of having to identify himself in a crowd? Would he get annoyed if I got confused and put my arms around some strange guy? He’d never said he loved me, just that he wanted to be with me. Did that mean marriage? Kids? My God, kids. I’d never be able to pick mine up from school without making them wear some stupid hat or something.

Everyone has insecurities and everyone has their challenges. Debbie, though, is defined by hers. She photographs bodies because she can’t recognize faces. She resists committed relationships because she worries her inability to recognize them will annoy them eventually. She considers herself broken and incapable of love. Not only do I not understand her anxieties, I mean, blind people exist and love and are loved while not seeing faces, but the way they’re used in the story feels like the non-disabled author is projecting her own horror at this disability. That these anxieties are resolved by the love and acceptance of a non-disabled man and not with her coming to an agreement with herself that she is whole and worth the love of any man or woman feels more like an ableist caretaker fantasy than a true HEA that respects the lived experience of disabled people.

“That was what that was all about? You punched him over me?”

He shrugged. “You were dancing with him most of the night. And laughing.”

“Debbie, honey, I’m just telling you what I want. You think about it. But be sure, because once I have you I’m not letting you go, understand?”

“Stop it. I’m sorry, okay?” His hands cupped my face. I turned it away from him. “Honey, I didn’t mean to make you cry.” I felt him lean forward and his lips touched my forehead, my hot cheeks.

“I always cry when I’m mad. It doesn’t mean anything.” I felt him smile against my skin.

“I was jealous. I saw you laughing and flirting like you always do. Looking gorgeous, and for a second I was back where I was weeks ago, wanting you and hating you at the same time.”

So. Do I have to explain why these excerpts sound like abuser logic? “I didn’t mean to hurt you. You just made me jealous and made me hate you.” Need I remind you that HE IS A COP? Who will help her if she tries to leave and he keeps his promise and won’t let her go? Will his buddies cover it up when he hits her in future fit of jealousy? How people can read this and see romance utterly baffles me. Considering how intimate partner violence plays out in the real world, it seems that either people don’t recognize the signs of abuse or they want to downplay or spin them because it’s too upsetting to admit that abuse is present. In any case, I’m completely not interested in pretending this hero isn’t a giant red flag. Books set in the real world are judged by the rules of this world, and people who hurt others when they’re jealous are bad news.

Final Assessment: No sir, I don’t like it. D-

3 Responses to “The Nekkid Truth by Nicole Camden”