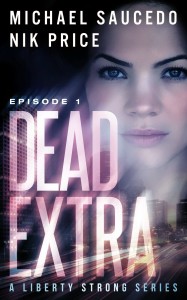 Liberty Strong is a recently divorced mother of two trying not to lose her house, her home or her life. When a fellow actress ends up dead on the set of her hit daytime drama, it looks like Liberty’s cat and mouse game with her boss has turned into real life murder. Unfortunately for Liberty it’s not clear which of them is the cat.

Dead Extra is an interesting hybrid. The cover is a dead ringer for an Iris Johansen novel. While the book follows a number of romantic suspense conventions, it ends without a HEA or a HFN. Michael Saucedo and Nik Price open with a conventional cop-and-target romance before pivoting to a less expected place. Instead of disappointing, the ending felt fresh. That said, the format kept Dead Extra from fully realizing it’s potential.

Saucedo is a former General Hospital actor who uses his wife, current GH actor Rebecca Herbst, as the cover model for The Liberty Strong Series. He and Price originally released each section of the book as an “episode” with Dead Extra intended to be the first “series” of an ongoing work. Marketing to Saucedo / Herbst fans makes sense, as does placing Liberty Strong in a similar position to Herbst’s real life role as an actress under fire. Opening the series with a fair amount of contempt for daytime drama fans is therefore a confusing choice. (I’m not saying they’re wrong, I’m saying it’s daring to effectively insult the customer you’re aiming for.)

Dead Extra is absolutely a page turner. While some details of the story defy logic others are seamlessly integrated into the sort of drama soap (and romantic suspense) fans love. Liberty trusts all the wrong people before trusting herself. If only the entire manuscript had been given a strong edit. From the minor (a character changes mid scene from reporter to nanny and then back again) to the major (two key plot points are needlessly convoluted, defying basic common sense) Dead Extra begs for an outside eye. By the final pages Dead Extra has been telegraphing it’s villain so loudly that the reader wants to be wrong. While the finale would not be out of place on a daytime drama, in a book it’s completely over the top.

Although Dead Extra is a fairly conventionally white world, there are points of diversity. My favorite involved a F/F pairing that left me wanting a book focused exclusively on their life. Mild racism or classism is called out and addressed while still playing into some easy stereotypes. Dead Extra gets an A+ for readability, a B- for tight plotting and a C for logic. (I’m going to average it out to a B and call it done.)  Saucedo and Price offered me a realistically complicated woman with a twisting storyline. I’ll be back for more.

Love Me Not by Reese Ryan
Comments are closed.
Love in the Margins is a group romance blog trying to hit on the love stories that represent us all. We welcome discussion and criticism as we read through the stories of those whose lives don’t fit into the neat and tidy box labeled “default.”