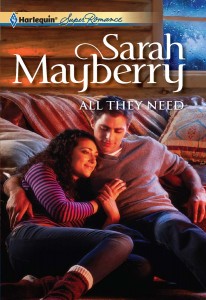 I was talking on Twitter yesterday about how books with tattooed heroes with violent tempers are frequently described as “edgy” and how it didn’t make sense to me. How can a violent construction of masculinity be “edgy” when it’s clearly the norm? Wouldn’t a straight hero who’s really into musical theater or one who crochets afghans to relax after work be a bit more like if you’re looking for the edge of something? So instead of the DNF post I planned to run, here’s a repost of a book I really enjoyed that has a hero who’s an enthusiastic flower gardener. A man who knows his way around a garden is much more my fantasy ideal than some meathead to fights guys who look at me. Watching a shirtless man sweat in a field of flowers beats the hell out of posting bail, IMO.

If I had to highlight just one thing Mayberry does that elevates her books above the rest, I would have to choose the way she writes disagreements. Her characters act out at each other from a place of insecurity that feels true to the complicated, flawed little monkeys we all are. They say the same stupid things and make the same silly mistakes we all do, then get to resolve them like we’d all love to. The end result is a powerful, engrossing story where you’re rooting for the couple with your whole heart.

Our heroine is Melanie Porter, recently divorced and the new owner of a string of vacation cottages. It’s been 18 months since she’d left her wealthy husband and she’s slowly undoing the damage he’d wreaked on her self-esteem and emotional state with his constant verbal abuse. When our hero arrives with his girlfriend to stay in one of her cottages she finds she’s still got a long way to go. Flynn Randall was present at the Melbourne society party that proved to be the end of her marriage, and despite he and his girlfriend being perfectly friendly to her, she still can’t help the panic and worry that she doesn’t measure up and that they’re silently judging her. Little does she know, though, that she wouldn’t be the only one feeling awkward that day.

You see, Flynn had come to the area just to meet with a real estate agent about Summerlea, a historic estate with famous gardens that he’s coveted since he was a young boy. When he gets back to the cottage, however, he discovers that his girlfriend had another goal in mind. Blindsided by her heartfelt marriage proposal, he realizes how thoughtless he’s been with her feelings. Preoccupied with his father’s recent diagnosis of Alzheimer’s and his taking the reins of the family company as its CEO, he’d fallen into a comfortable relationship without considering what expectations she might have. After awkwardly turning her down, he returns their key to Mel, and heads back home.

They meet again when Flynn comes up to inspect Summerlea, which he’s decided to buy, and thus begins the courtship dance of one gun-shy divorcee and a guy with way too much on his plate to be looking for love.

Before I get into the disagreements I alluded to in the first paragraph, I should point out that the characters do something fairly rare in romance – they share a passion for a particular hobby. Both Flynn and Mel are avid gardeners and gardening plays a major role in their romance. It’s the safe topic of conversation and the window to their hidden selves at the same time. It’s an excuse for Mel to visit Flynn without breaking her no dating rule. It’s how Flynn ends up meeting all of Mel’s family. And it never feels contrived because you see their love of gardening is genuine. You can just tell that well after their HEA, they’ll be working together on their enormous gardens in companionable silence.

And thank heavens they had something neutral to talk about, because they’d have died of mixed signals without it. This was sort of a bizarro world romance in that the heroine was the commitment-averse headcase running hot then cold and the hero was the self-sacrificing, ever patient rock willing to do what it takes to win her love. Her ex-husband all but obliterated her sense of self and she’s scared to death of getting involved with a guy again. The panic rears its head when she and Flynn first try making out in her kitchen:

She started pushing his jeans down, her hands frantic. He smiled against her mouth.

“Slow down, babe. We’ve got all night,” he murmured. His tone was light, but his words hit her like a slap.

Suddenly she could hear Owen’s voice in her head, cold with condemnation and disgust.

Did it ever occur to you that maybe I’d like to take the lead now and again?

Could you at least try to pretend you’re not always gagging for it? And you wonder why I don’t like you talking to other men.

She jerked away from Flynn’s kiss, her whole body tense. She tried to turn away from him but he caught her shoulders.

Baggage: Mel has some.

And so we arrive at why I’m not giving this an A. I thought Flynn and Mel were great characters working through a perfectly believable and entirely reasonable conflict. However, the book needed to be twenty pages longer to give the conflict more time to resolve. We went from never marrying again, never sharing a home again, full stop, to here’s the spare key to my house, you were right, Flynn, in a single chapter. It was too fast, both for the pace of the narrative and for the characters within the book, since it was dispensed with in just a few weeks. Real problems like theirs deserved more respect. I would have preferred more of a work in progress ending than their neat, tidy HEA. Also, Flynn was kind of too perfect. It’s a precious sort of complaint, but there it is. If he were a heroine, he’d get called a martyr.

Final Assessment: All They Need was a delightful read that packed an emotional wallop. I never stopped cheering for them to find their happiness. Not even when they put beetroot and egg on their hamburgers. B

5 Responses to “All They Need by Sarah Mayberry”