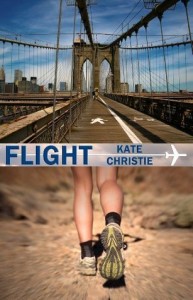 Author Jill Sorenson stops by today with a review of a coming-of-age/New Adult f/f book that she really enjoyed.

I have no idea why I bought this book. I think I found it on Amazon during one of my endless searches for affordable, well-edited lesbian romance. By the time I got around to reading it I couldn’t remember why I had it or what kind of book it was.

The story opens with Ashley “Ash” Lake, recent high school graduate and former track athlete. Ash’s aunt, who raised her, has just died. Her gay best friend, Austin, has been kicked out of the Navy. He’s managed to secure a great apartment in West Village for a year while the owner is traveling. Austin invites Ash to live with him. It’s the early 90s, which seems like a fabulous time to be gay in New York City, but also a scary time because of the AIDS epidemic.

During the first few weeks, Ash gets to know the city. She hangs out with Austin in cool places. She takes a bike ride and gets freaked out by the crowds/traffic/piss smells. The period details and setting descriptions made this section a joy to read. I graduated from high school the same year, and I never went to NYC but I always wanted to. This book made me feel like I was there.

Ash has an angsty secret past. She is the sole survivor of a plane crash in which everyone else on board was killed, including her parents. She thinks of herself as a jinx and has trouble getting close to people. One day while running in Central Park, she’s hit by a Frisbee and meets Drew, a male college student.

Wait a minute here. Is this a straight romance or a lesbian romance? I wasn’t sure, and I liked that. There are only subtle clues about Ash’s sexuality. She finds Drew attractive. She notices how handsome Austin and his friends are, and how nice their muscles look. She dirty dances with Austin just for fun. But there’s no sexual tension—and I liked that, too. Ash and Austin love each other as friends. Ash isn’t interested in watching Austin kiss boys. She’s not very interested in kissing boys herself.

Ash has other interests. She wants to be a bike messenger. She gets better at navigating the streets, and another messenger shows her the ropes. Then she finds work and dives into it. Austin doesn’t approve of the risky job, and neither does Drew, who slowly becomes Ash’s boyfriend, despite a lack of sizzle on her end.

Drew is a self-proclaimed feminist who doesn’t rush Ash into sex or tell her what to do. But he gets frustrated with her, and his actions don’t always match his ideals. I didn’t know if he was the wrong person for Ash, or if she wasn’t into guys, or if she just needed to open her heart to him. At one point in the story, Ash gets hit by a reckless driver and punches him in the face. I thought “aha! Maybe this is her true love.”

The reckless driver isn’t her true love. Neither is Drew. They have a fight and break up. I was glad she finally cut the poor guy loose. She also gives up being a bike messenger and decides to pursue running again.

Ash has taken a year off to grieve her aunt. Now it’s time to get serious about applying for colleges with strong athletics programs. She meets another runner—a beautiful girl—from a university in Arizona, and everything clicks. They become fast friends. Ash can’t stop daydreaming about something more.

The second half of the story doesn’t have the same exhilarating tension as the first. When Ash finally figures out who and what she wants, there are too many obstacles and mourning scenes and false interruptions. For me, this is a better coming of age story than a romance, but the romance is sweet and hopeful, with a believable happy ending.

What struck me most about Flight was its authenticity. I thought of the word ‘truisms’ while I was reading. There is a lot of truthiness in the dialog and the characters’ actions. I nodded along with many passage and related to the overall feeling of being a young woman who struggles to find her way. The writing is excellent, with no typos or grammar mistakes that I noticed. I really enjoyed Ash’s journey.

Final Assessment:People say they want more diversity! And lesbians! Especially in genres like YA and NA. Well, here it is. Low price, great story, not a debut author, and only 3 reviews on Goodreads. A-

2 Responses to “Flight by Kate Christie”