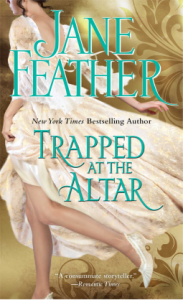 Trapped At The Altar has a street date of July 22nd but I can’t wait. (Sorry, kids.) Jane Feather was highlighted in June by NetGalley. While the synopsis didn’t grab me, the advance chatter did. This is an awful, terrible, no good book with a slut heroine whore? TELL ME MORE! (Well done, NetGalley publicity peeps!)

Ariadne fits a lot of standard genre checkboxes. She’s super skinny, athletic, defiant and irresistible to most. This means she’s going to have at least one family member who can’t see the back of her fast enough. Gabriel is the man she loves, a kindler, gentler version of masculinity. Ivor is the emotionally fractured best friend her family wants her to marry. Readers, we have a triangle. Unlike most triangles, this one involves Ariadne making pragmatic choices based on her realistic options and immediate desires.

Minor Spoiler Within - Bacon Makin'
In a classic genre scene Ariadne has to provide a bloody sheet to prove her virginity and her marriage. Her husband slices his arm enough that they worry about infection. I’m not sure why romance couples think the sheets should look like someone slaughtered a pig. They’d have seen at least one set in their lives and be aware that a few light smears is more than adequate. Whatever man, it’s time to open a vein.

Ivor, Gabriel and Ariadne are of different social classes (although the differences are slight) and faiths. Faith is used more as a political tool in this Late Restoration era tale than it is a motivation. Belief in oneself is primary, in one’s family secondary, and one’s church not even a distant third. It was lovely to read a book set in the Restoration again. While Feather’s sense of place can be imperfect, she adds enough appropriate details to remind the reader that this is an unsettled time with different perils than we’re used to our historical heroines facing. Treacherous self interest was a feature, not a bug.

Feather spares us the slut shaming and moralizing – Ariadne is allowed to be a person. She’s a little too perfect, but I forgave her. What I didn’t forgive was the obsessive service of her employee. Tilly is a Siri commercial. Need something done? Tilly is on it, happy to do it, expertly inclined and way ahead of you, boss. (One day she’s going to murder them all in their beds.)

“The petticoats are very stiff, and the stomachers are so tight.” Ariadne examined the picture and grimaced. “How could anyone breathe in that? Well, I, for one, will not wear anything like it.” “Fortunately, Miss Ari, the gown will sit well enough on you without such tight lacing,” Tilly declared, divesting her mistress of her jerkin and busily unfastening the waistband of her skirt. – Trapped At The Altar by Jane Feather

Ariadne doesn’t even need arms with the ever adoring Tilly around. Sure, Ariadne occasionally pitches in, but let’s face it – Tilly would get more assistance from your average toddler. Tilly is always telling Ariadne that Ariadne can go without various undergarments. If Tilly was a modern day assistant she’d be asking for Pants Free Fridays.

Ivor and Gabriel both get impatient with Ariadne but neither is abusive. She’s forced to consider their emotions and modify her own impulses in a way that doesn’t feel like either is controlling her. A subplot about fertility comes late enough that it also illustrates how her perceptions are changing. As she leaves her childish ways behind she learns to think ahead and plan accordingly. Ariadne is not shamed for her actions but she is shamed for not fully considering all aspects of them. It’s an interesting slant on the topic that could have easily gone wrong.

The final third of the book feels rushed. Ariadne decides where her future lies and bam, we’re done. Her time at court comes too easily, the complicated conflicts driving the period (and her destiny) are pushed aside. I think this is the reason I dropped Jane Feather a few years back. She doesn’t shy from complicated lives but she does pull back from complicated times. On the positive side, Ariadne’s journey from self involvement to partnership is well executed. This is a story of an adolescent figuring out where she wants life to take her. Ariadne has to evaluate how her goals fit into the world she inhabits, prioritize her options and move forward into adulthood. I kind of loved her.

Thoughts On The Cover Art
How awful is this art? First of all, that wedding dress is straight up 1990, with the big mutton sleeves to prove it and the left over 1980’s satin. The bare back / legs combination is a cover standard, but there’s no indication of time period at all here. It’s vaguely bad regency cover that could also be chick lit. Restoration Era readers will end up missing this one.

Final Assessment: A bingo card of cliches with a polarizing heroine ultimately delivers. B

Tagging Note: I feel odd ethnicity tagging books only when the racial makeup of the leads is not the default white. This book is super white but a White Romance tag feels as wrong as keeping a silent White Default status going. If you’ve got thoughts, let me know. 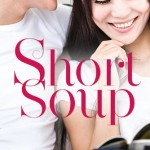 7 Responses to “Trapped At The Altar by Jane Feather”