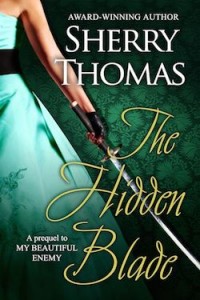 Strictly speaking, The Hidden Blade is not a romance. Sherry Thomas has put out the world’s longest prologue and I couldn’t be happier about it. If I’d had My Beautiful Enemy I’d have started reading it the second I finished The Hidden Blade. (Since it was 4:20 in the morning mistakes would have been made. Be happy for me that I got a few hours of sleep instead.) WithThe Hidden Blade Sherry Thomas has rolled (almost) all the dice at once and I can’t wait to see how they land.

Ying-ying, the female lead, is half English (because of course) but well versed in myths about the foreign devils. Her mother is attached to the Imperial Court without being a member of the inner circle. Her father is gone. Ying-ying lives a life she’s ill-suited for, leaving her feeling useless and spoiled. Her spirit is not calming or decorative, but rebelliously eager. One restless night she discovers that there are more secrets surrounding her than she could have dreamed. Ying-ying’s eyes are opened to the instability of her situation and the masks those around her wear. Everyone in her life is imperfect, including Ying-ying herself.

Leighton has always suspected that those around him were hiding themselves. He has a distant and difficult (but loving) relationship with his mother. She comes and goes with his younger sibling but never takes him from his father. Leighton only half minds, as when his mother is away his father’s closes friend arrives. Leighton, his father and their friend form an intact family of their own. He feels secure and confident in their shared bonds even when unrevealed truths shake his childlike perception of his family. There’s a misstep here that needs a spoiler, actually a major spoiler. Read it only if you are triggered by book deaths.

Sex Positive Southern Girls.
Leighton’s father and his best friend are in love. This is a m/m parental relationship that Thomas paints a little too idyllic and glowing. They’re almost saints in their interaction with Leighton, and he returns the favor by overcoming any and all societal programming in seconds. It’s Sex Moppet or something. Anyway, everyone gay eventually dies. None of them make it to the end of the book. This is incredibly frustrating. I understand why it unfolds that way but if there isn’t a major non-heterosexual character who survives in the main book I’m going to cry foul on Thomas and hard.

Thomas does a wonderful job creating the place and time of Ying-ying’s youth. I had some minor issues with the paranormal aspect of Chi, but it’s an accepted thing for movies and books about the martial arts. Ying-ying moves too quickly from fearing the foreign devils to considering them above the Chinese in their culture. I was unconvinced that some of the thoughts she holds late in the novella would occur to the girl she was, from the experiences she’s had. It’s a small detail. With horrible missionaries and all knowing masters Thomas has taken standards of East Meets West storytelling and created something new. I loved almost every page of The Hidden Blade. You absolutely must read it. It’s an A, (although it’s really an A minus for both spoiler reasons) because I couldn’t be sensible and put it down.

Earning Your Upgrades
At the close of the book Leighton is traveling from China to England to China and over to America like Delta flies on a schedule. I know in the Victorian period these were more common routes, undertaken more regularly. It’s still an awful lot of back to back travel treated like no big deal after a more realistic look at the logistics of same.

Final Assessment: Beautiful look at a Chinese childhood and a less conventional English one. A

Series: Prequel to My Beautiful Enemy

One Response to “The Hidden Blade by Sherry Thomas”