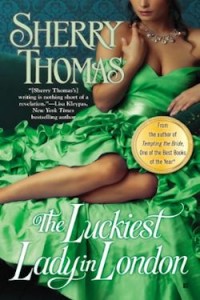 I admired The Luckiest Lady In London. I admired it because Sherry Thomas took some risks that will pay out big for readers who are not me. I admired it because this is the exceedingly rare book where the sex is necessary to the story and not pages of skippable filer. It’s also full of  class issues and a continual fear that the reader is headed for Surprise Kink. (Spoiler alert, nope. Or rather, nothing that requires any sort of advance notice.) The Luckiest Lady In London is a Beauty and the Beast tale with a side car of astronomy and maths. If you love those, you’re going to love this. Let’s get into why I didn’t.

Felix is a terrible person. He’s rich, attractive, and relatively amoral. Oh sure, he (and the book) would have us believe that under it all he’s really just a hurt boy. That’s the whole beast thing. What first attracts Felix to Louisa is a power differential. He’s aroused by her ability to see behind his mask and fear him. The last half of the book would have you believe that it’s her clear eyed pragmatism and sex positivity, but the first half is more honest. Felix enjoys manipulating people who can’t fight back. It’s Louisa’s vulnerability that lights his fire. Felix’s father Loved Too Much (yawn) and his mother Hated Too Fiercely (mega yawn) leaving him determined to Never Be Vulnerable Again. We totally know Felix. His paw has a thorn and he can’t help but privately snarl. Got it.

Louisa is the Woman Who Must Marry Well but whom Secretly Wants To Do Science. She’s got the poor siblings back home, including one with epilepsy for added pathos. Louisa is convinced her family is utterly incapable of caring for itself, and Thomas gives us no reason to disbelieve her. In fact, her sisters are near invisible. There’s one who turns herself into a hermit. There’s one who doesn’t leave any impression at all. There’s one with epilepsy who remains fit free for the whole of the book, and then there is Louisa. She’s out to catch them all some financial security. Despite being sex positive and pragmatic, when Felix offers her buckets of cash without the promise of a ring, Louisa is offended. I’m not sure why, but we’ll give it to her. Felix sets about removing Louisa’s options while Louisa creates new ones. Here the class issues start kicking in.

Felix gives an impassioned speech about Louisa lowering herself. Marrying a man who is not in the nobility is horrific, a fate Louisa shouldn’t have to suffer. To do so would mean a loss of security (that she does not have), of her friends (who are fair weather, and could be replaced) and her status. I’ll give Louisa the point that rank is power in this world, but the Victorian tides of change were already rolling. Estates are no longer self sustainable. Felix’s house is open to the public. Accompanying their view of improper marriage is the near invisibility of their staff. Felix and Louisa are almost never interrupted, almost never visibly use the services of those in their employ, and only occasionally worry what those servants will think of their actions. There are Real People and Other People. It’s not untrue, but it’s not sugar coated either. (I’m on the fence about this.)

Ultimately The Luckiest Lady In London is about  facade obsessed people who long to be loved for their imperfect selves. As a couple, they are well suited. Their relationship is beautifully developed even if Thomas does pull the punch of the early power imbalance. Felix’s casual cruelty and Louisa’s knowing acceptance of it promises continued happiness. A late book revision of his character raises a brow, (as does the thought of them as parents) but doesn’t undermine the whole. Sherry Thomas has delivered a solid read about flawed people turning a physical connection into a viable relationship.

The Jade Temptress by Jeannie Lin
Comments are closed.
Love in the Margins is a group romance blog trying to hit on the love stories that represent us all. We welcome discussion and criticism as we read through the stories of those whose lives don’t fit into the neat and tidy box labeled “default.”