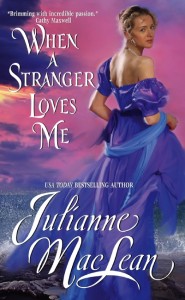 (I’m tired of writing DNF reviews and tired of hating everything but it’s one of those weeks. Instead of running no content today I thought I’d bring back a post from one of my now-deleted former blogs. Welcome to 2009.)

Julianne MacLean has been doing a series about four brothers who have to wed because their father will leave all of his money to a questionable charity if they don’t. Not that he’s dead yet, but it was his last legal will before he was declared insane, so it would hold up. Except that I can’t see how it could, but we’ll go with it. You know what? Lorraine Heath has a really good series going. Why not buy that and take my word that nothing good will come of this? No? Ok, here’s the short version – They meet, they have sex, they like it, they do it as often as they can, find out they might not be able to have sex anymore, figure out how to have it again, the end. (Now for the long version. When A Stranger Loves Me certainly has a few Plot Points.)

Jack washes up naked on a beach with no idea who he is, just that he’s really, really angry. Luckily he’s found by Chelsea who just wants to check his package out until she realizes he’s not dead yet. Soon he’s resting comfortably at her estate, where she is rusticating with her bitter mother, her brother and his childless wife. (There used to be a politically prominent father but he died.) Chelsea is a Hermetically Sealed Heroine. She’s faced down social ruin. Still a curious virgin, Chelsea is happy to live with her mother forever and write romance novels (ugh). There’s an evil-ish cousin back in London who wants to marry her but Chelsea would rather die or something. (Already I don’t care).

Jack wakes up, he attacks her, she fights him off. (Yawn) Everyone but Chelsea is all wow, he’s an unstable naked amnesiac, we better lock him up! (It was nice of them to give the naked stranger the benefit of the doubt, I suppose?) Almost getting killed was kind of hot, so Chelsea comes to Jack’s room to tell him what a whore she is. No, she does. Chelsea brags about running off with some guy she decided not to marry. Jack’s like, good to know but my head hurts. Chelsea finds his indifference super hot. She tells her brother she’s had a great idea. She should have sex with Jack as soon as possible. (Insert infertility plot about her brother’s lack of heirs being the reason icky old cousin with the yellow teeth and bad hair wants to marry our heroine.) Chelsea thinks a few hours under hot, angry and amnesiac would solve most of their problems. She can give the baby to her brother and his wife. Instant heir! No more stalker cousin! Her brother wonders how that would work. Chelsea has obviously spent way too much time figuring it out, since there’s no television and therefore she’s unaware of the many ways a Secret Baby happens.

Obviously the best plan is to take her sister-in-law off to the Alps for a month and make the big baby switch. There’s no way crazy old heir cousin is going to question her sister-in-law’s infertility mysteriously ending in the Swiss Alps. I mean, c’mon. Totally plausible! Her brother hates the thought of pimping her out – but then he realizes that Secret Babies are the bomb and climbs aboard the crazy train. Woot! The good times don’t last. We have to suffer through a crisis of conscience as he becomes mega emo. It’s so hard to sleep nights what with his sister banging this mysterious homicidal guy, but Jack has posh accents so maybe the baby will be cute? He doesn’t even know. What does everyone he could possibly talk to about it think? His wife just wants a baby omgsobad. If Chelsea can get her Jack off and avoid marrying Mr. Creepy Cousin her sister-in-law is all about it.

Chelsea runs to Jack’s room with the good news. We’re going to have sex! Jack’s pretty confused by this. He may be angry, semi-violent and naked but he’d prefer to understand her motivation. Chelsea lies and says she wants some good times before the bad times hit. Jack can understand that so they get to it. And to it. After a few chapters of the sexxing he’s like, hey, I better not knock you up. She’s all RUT-RO! But he doesn’t really mean it. Jack’s tossing the idea out there so he can get all pissed about her failing to force him to mean it later. Luckily, just as Jack is starting to get a clue his family shows up. They arrive moments into his freak out about her using him for a baby instead of using him for sex, (which is totally different). Chelsea’s like, Noooooooo I loooove you and Jack’s like, I am Anger Man and I insist you be my captive until we see if the seed has been planted (or some equally lame description). Umpteen chapters of sex for the sake of sex and lots of anger for the sake of – I dunno – later we’re off to his place.

Jack is twice as angry to discover he has a large loving family and a lot of money. Can’t he EVER catch a break? First he washes up naked on the beach of a hot chick completely up for it and now he’s got cash? Why does he always win??? His family says dude, that blow to the head is making you act pretty weird. Jack takes the anger up to 11. Don’t tell ME who I am, because I DO NOT KNOW! My amnesia beats your memory so STFU! Jack’s family says – uh, whatever. None of them hate Chelsea for being a whore (she loves telling people how wicked she is), or trying to steal his baby or anything else, because she’s restored his lost artistic skills through the magic power of her sexxing. She’s SO creative that her creative-ness has made him want to be creative and that makes his family really, really happy. I dunno. It stopped making sense to me back at Chelsea’s place when he punched her brother in the face for letting him sleep with her. (How dare you let me bang your sister! Don’t you know what kind of man I am? Now lie there while I force her from your home!!)

There’s plenty of plot left. I know. I’m sorry. It comes to pass that Jack has a wife no one knew about, except maybe he doesn’t, except maybe he does, except…… he does AND he doesn’t! (Wait, what?) Jack’s wife has a brother who tries to rape Chelsea. No idea why. He’s just The Guy Who Tries To Rape The Heroine So The Hero Can Realize He Loves Her. You know. That guy.  Now everyone gets mad. The wife throws her brother in jail forever and says she didn’t want Jack to be her husband anyway. Chelsea’s not pregnant! Her infertile sister-in-law is! YAY! I hated everyone in this mess. I hated Jack for being nothing like he was in previous two books of this series. I hated Chelsea for enabling him. I hated their families for placidly accepting any curveball thrown their way. I hated the wife and the Bad Guys for being so cardboard and easily resolved. I hate Jack for not being the hero I expected or wanted. Me and Julianne totally broke up but Jack and Chelsea went for the HEA.

The Last Wicked Scoundrel by Lorraine Heath
Comments are closed.
Love in the Margins is a group romance blog trying to hit on the love stories that represent us all. We welcome discussion and criticism as we read through the stories of those whose lives don’t fit into the neat and tidy box labeled “default.”