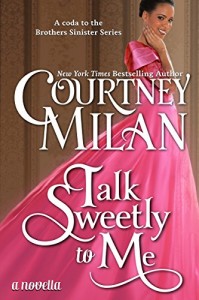 Well, it had to happen. I found the Courtney Milan book I went completely meh for. Is it bad? No. In fact, Milan’s Talk Sweetly to Me reminded me of Edith Layton’s beloved holiday novellas, despite having not a hint of holiday about. (For reasons I won’t enumerate, I was pleased this story is canine-free.) Part of the problem was me. Rose Sweetly is a computer – a mathematician working with astronomers. The women who worked as computers were fascinating individuals but I am math averse. I have math induced hostility. On a list of things to read about, math is very low on my list. All of the math jokes, math explanations and math related content were more than lost on me, they were wasted. (Did I mention this book contains math? Well it does. So be aware of that going in and make your own life choices.)

Beyond the math, Rose is a black woman. (I didn’t get that from the cover. The cover actually reminded me of the Duchess of Windsor, or possibly Bette Davis in a weirdly pink phase.) That was a positive. POC have lived in England for hundreds of years, a fact too often overlooked in this genre. Rose is paired with a fan favorite from The Suffragette Scandal, Stephen Shaughnessy. Stephen is as artless and charming as Rose is studious and serious. I didn’t care about either of them. Stephen sets about seducing Rose while assuring her that he is only interested in her company. It’s patently obvious that he’s lying. The math lessons he contrives to spend time with her (despite their living as neighbors) introduce unnecessary amounts of math into the story. Stephen loves seeing Rose excited, and what excites Rose is calculations. Why? There are so very many other things to get excited about. Even the most genius of geniuses has other areas of interest. I don’t need Stephen to find mathematics dull, but he doesn’t care about them in the least. So why does he care so deeply about Rose? We don’t really find out.

Rose is attracted to Stephen because he’s humorous and charming and the life of the party. His sincerity and honesty win her while (apparently?) her intelligence has captivated him. Through a series of circumstances, Rose finds herself alone with Stephen and is ridiculously Up For It. On neither occasion did I believe that this women would choose to get that busy in those circumstances with anyone, even the effortlessly seductive Stephen. When the naughty librarian kicks off her glasses and shakes out her bun it’s heavy metal videos, not logical character progression. No. No. No. My point is not that Rose Sweetly would lack carnal impulses, it’s that she would be very unlikely to go from zero to sixty in the circumstances presented. Plus there is math.

Nothing is at stake in Talk Sweetly To Me until the very end. I had an issue with that too, because once the meh train is rolling it must stop at every station. Why was Rose’s sister effectively alone? Why hadn’t their mother already come to stay? Why was all of their faith placed in one of her husband’s co-workers? Why were none of the neighbors befriended or entrusted? Why did these highly intelligent women have no plan B or C in place? Rose understands probability and reality, how did she not consider they could end up in a precarious situation? Too much of Talk Sweetly To Me happens because it needs to happen, right down to the Folger’s Coffee ending. Meh, I say, meh.

Final Assessment: A math and astronomy enthusiast meets a charming columnist.  B-

7 Responses to “Talk Sweetly To Me by Courtney Milan”